Light pollution: Geneva to switch off its street lights 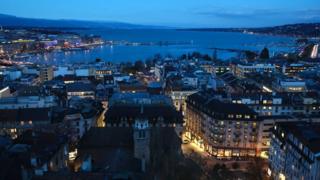 Usually if the lights go out in a city it means there is a problem with the electricity, but one city in Switzerland is turning off the lights on purpose.

On 26 September, Geneva go dark to raise awareness of the impact of light pollution.

The Natural History Museum of Geneva and the Geneva Astronomy Society came up with the "La nuit est belle" or the night is beautiful project to show people why a dark sky is important.

How do you count the stars?

When is the best time of the year to go stargazing?

Lots of areas are taking part, 149 districts or councils across the Greater Geneva region which includes parts of France, have agreed to turn off street lighting.

Major buildings and organisations have also signed up including CERN, the European Organization for Nuclear Research known for its creation of the Hadron Collider.

Organisers hope residents will turn off the lights in their homes as well and head out to look at the stars.

What is light pollution?

Light pollution is when artificial light, like street lamps, make it less dark at night.

It's a problem for astronomers because you can't see stars when the skies are flooded with light.

The organisers of "La nuit est belle" say September 26 was chosen on purpose as the visibility of the Milky Way should be at its best at sunset.

But stargazing isn't the only reason people say you need a dark night.

Scientists say light pollution causes disruption to animals and plants. They also say that it can affect human health because it can make it more difficult for some people to sleep.

Meteor Shower: How can you see the Quadrantids?

Billions of stars (including the sun) are turning into crystals