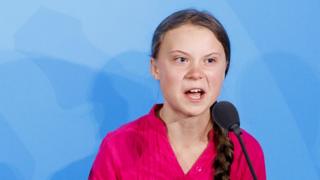 Greta Thunberg might only be 16 years old, but she has become famous all over the world for campaigning against climate change.

She's given a number of powerful speeches since she first started her #FridaysForFuture movement last year.

Millions of young people have joined her on protests, with many children walking out of school to take part.

At an important climate summit in New York at the start of this week, she addressed world leaders in a passionate speech to encourage them to do more to protect the planet.

It wasn't the first time that she has spoken out about the issue.

Here, we round up some of her most famous quotes from interviews, social media posts and speeches.

"The eyes of all future generations are upon you. And if you choose to fail us, I say - we will never forgive you." - UN Climate Summit, New York, 23 September 2019

Greta has talked many times about the importance of world leaders taking action to deal with climate change.

This quote is taken from her powerful speech delivered to world leaders at the United Nations Climate Action Summit in New York earlier this week.

Greta in the US

Greta had a powerful message for world leaders at the UN summit earlier this week.

My message is that we'll be watching you. This is all wrong. I shouldn't be up here. I should be back in school on the other side of the ocean. Yet you all come to us young people for hope. How dare you. You have stolen my dreams and my childhood with your empty words. Yet I am one of the lucky ones. People are suffering.

"We showed that we are united and that we, young people, are unstoppable." - UN Youth Climate Summit, New York City, 21 September 2019

It came after she joined millions of people around the world for a global climate strike.

The aim of the youth summit was to provide a platform for young leaders to offer their solutions to the climate change crisis.

"We are striking because we have done our homework, and they have not." - Climate protest in Hamburg, Germany, 1 March 2019

Earlier this year, Greta joined thousands of students in a Fridays for Future demonstration in Germany.

At the protest, students held banners bearing slogans such as "March now or swim later" and "We (heart) Greta".

The #FridaysForFuture movement began in August 2018, after Greta skipped school to sit in front of Swedish parliament to protest the lack of action on the climate crisis. After going viral, her campaign has inspired many more students movements across the world. 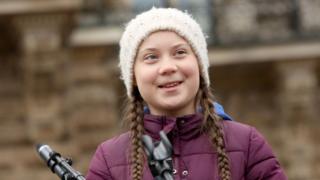 Getty Images
Teenage Swedish activist Greta Thunberg demonstrated with students in Hamburg, Germany on 1 March 2019
"Since our leaders are behaving like children, we will have to take the responsibility they should have taken long ago." - COP24, Poland, 4 December 2018

Greta made this speech at the 2018 United Nations Climate Change Conference, which was held in Poland.

At the summit, she accused world leaders of causing problems for future generations by not doing enough about climate change.

"Why should I be studying for a future that soon may be no more, when no one is doing anything to save that future?" she said.

This quote was her closing line of a speech given at the World Economic Forum in Switzerland earlier this year.

In addition to speaking at events like this, Greta shows her commitment to the climate through her actions. Instead of flying to this meeting, she travelled for 32 hours by train.

She famously does not travel by plane due to their high carbon emissions. For example, she sailed across the Atlantic to attend events in New York this month.

Greta's journey to the US

The moment she arrived in the US

"The moment we decide to fulfil something, we can do anything." - Houses of Parliament, UK, 23 April 2019

This line came from a speech that Greta gave to politicians in the Houses of Parliament in the UK.

Her words focussed on how future generations will look back at the climate crisis.

Whilst she spoke, crowds outside protested outside the building to put extra pressure on UK politicians.

"When haters go after your looks and differences, it means they have nowhere left to go. And then you know you're winning!" - Instagram, 31 August 2019

Greta has a condition called Asperger's Syndrome. For people living with the condition, social interaction can be more difficult.

Not long after she arrived in New York earlier this month, she took to social media to address some of the unkind comments she had received about her appearance and "being different".

"I have Asperger's syndrome and that means I'm sometimes a bit different from the norm. And - given the right circumstances - being different is a superpower," she said.

The post, which currently has almost 950,000 likes, was widely shared and the young activist was praised for bravely speaking out against internet trolls. 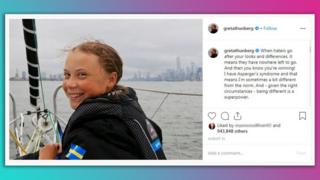 Instagram/@gretathunberg
Greta took to social media at the end of August to address nasty comments that people had made about her
"You must unite behind the science. You must take action. You must do the impossible. Because giving up can never ever be an option." - US Congress, Washington DC, 17 September 2019

Greta has said many times that she wants the facts, rather than herself, to be the focus of her campaigning for action on climate change.

In her speeches, she references scientific evidence and demands that world leaders listen to scientific facts.

These were her closing comments to Congress at a big speech she made after arriving in New York earlier this month.

You can read more about what she said to US politicians here.

The moment she defended herself against internet trolls

What happened when she met former US president Barack Obama?

Whilst millions of people across the globe went on strike, Greta herself joined a rally in New York, along with around 100,000 people.

Many students who witnessed Greta speak said that they felt moved by what she said, calling her "empowering".

Following the global strikes on Friday 20 September, Greta posted a picture on Instagram highlighting the number of people who had taken part.

Have you been particularly moved by anything that Greta has said? Let us know in the comments below.

Plastic pollution: How a 12-year-old is helping her town to save the planet