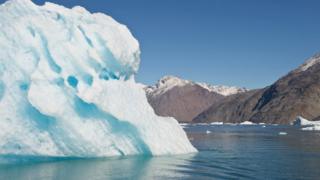 A report led by the World Meteorological Organisation (WMO), released ahead of important UN talks in New York, says the five year period from 2014-2019 is the warmest on record.

Levels of carbon-dioxide and other greenhouse gases in the atmosphere have also increased to record levels, which means further warming is already inevitable, according to the WMO.

The data also shows that sea levels have risen significantly.

Sea levels have been rising by an average of 5mm a year in the past five years, compared to 3.2mm a year on average since 1993, with much of the rise coming from glaciers and ice sheets that are melting much faster.

The report talks about the threats to the oceans, with more than 90% of the extra heat caused by climate change ending up in the waters. The WMO says 2018 had the highest ocean heat content values on record.

The report, called United in Science, is backed by world's major climate scientists and was produced for the United Nations Climate Action Summit.

It also says promises to cut greenhouse gas emissions should be at least tripled to limit the increase to 2C and increased five times to keep the global temperature increase around 1.5C.

A 1.5C rise is considered the threshold for dangerous climate change.

During the Paris climate talks of 2015 world leaders agreed to keep global temperature increase "well below" 2C (3.6F) and to try to limit it to 1.5C.

But in 2017 President Trump withdrew from the agreement saying it was a bad deal for America and would cost lots of jobs.

In the UK, the government led by former prime minister Theresa May, pledged to cut carbon emissions to almost zero by 2050.