Whitney Houston, Gorillaz, Hatsune Miku: What is a hologram tour? 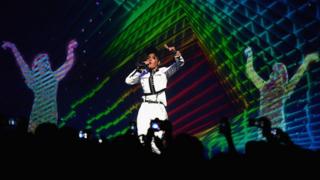 Whatever music you like, nothing beats seeing your favourite band or artist live in concert, right?

You and your mates singing along to your favourite tracks with thousands of other fans.

But does the performer actually need to be there for the show?

Well not if they've got a 'hologram'. BTS, Janelle Monae and MIA are just some of the music stars using the tech in their shows.

The circus where all the animals are holograms

When Santa got turned into a hologram

Will teachers be replaced by holograms? 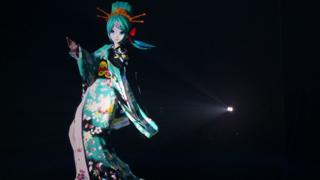 She opened for Lady Gaga during her 2014 tour, released a remix of Happy with Pharrell Williams, and is off on her world tour on 14 October.

Miku regularly performs to thousands of fans at her sell-out concerts across the globe.

But Miku is a hologram. A special computer programme allows her to sing and perform and fans can even use this programme at home to make their own songs!

How does a 'hologram' concert work?

Strictly speaking what happens isn't exactly a hologram, it's more like a clever reflection.

Projectors, like the one you see at the back of a cinema, play pre-recorded video of a music star onto a big piece of glass, that the audience can't see. Like a cinema it needs to be really dark for it to work well.

This glass, called a mylar sheet, is set at an angle so that when the video reflects off it it looks like it's a real three-dimensional moving human. 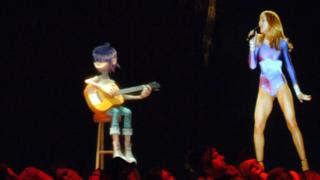 The four members; 2-D, Murdoc Niccals, Noodle, and Russel Hobbs have had huge success as a virtual band.

Their 2001 debut album went triple platinum and they made it into the Guinness Book of World Records as Most Successful Virtual Band.

And holograms aren't just for celebs. A circus in Germany is using hologram animals instead of real ones in their shows.

And some tech experts reckon we could soon be using hologram technology instead of phones to communicate with each other. 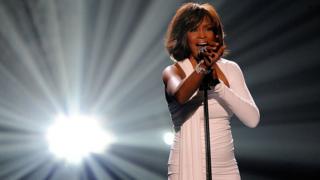 Hologram tours are also a great way for fans to experience a concert by music stars of the past.

Dates for a 2020 hologram tour by Whitney Houston have been released and rapper Tupac, Michael Jackson and 1950s singer Roy Orbison have all appeared as holograms.

Are there any downsides to hologram tours?

According to Danny Betsch, who works on big hologram tours, the problem is that they can only be seen looking straight on. So seats at the side of the stage can't be sold to fans.

The stage and arena must also be kept very dark so that the hologram is visible.

Some critics of hologram shows say the performance can feel a bit flat because it is lacking the atmosphere of a live performance.

Would you go see a hologram in concert? Do you like the idea? Or would you rather see the real thing?

A German circus uses holograms instead of animals and it looks amazing!

How do you think people will communicate in the future?