English Channel swimmer: The woman who swam it FOUR TIMES! 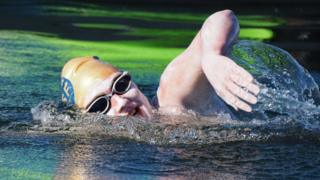 A woman from the USA has set a new world record by swimming four times non-stop across the English Channel.

Only four swimmers have swum three times in one go across the English Channel - that's the water between the UK and France - but no-one has ever completed a fourth leg.

What sport would Adam Peaty do if it wasn't swimming?

Fancy a swim in the world's deepest pool?

Sarah Thomas began the epic challenge of more than 80 miles on Sunday and has completed her fourth and final leg. She finished the swim in 54 hours and ten minutes.

The shortest route to swim one way across the English Channel is 21 miles long but it's one of the busiest shipping lanes in the world, so swimming across needs a LOT of planning.

The first person to successfully do it was Captain Matthew Webb back in 1875. 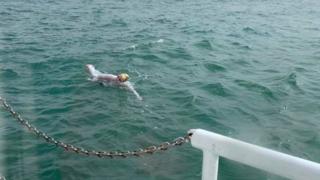 SARAH THOMAS
Sarah swimming strongly on the third leg of her challenge.

Last year Sarah had treatment for breast cancer and Elaine, who's part of Sarah's support team said Sarah "...really used the swimming as her means of coping with the treatment."

Sarah completed her first open-water event in 2007 - a 10 km swim in her home state of Colorado, USA - and went on to become the female champion of the race three times, as well as overall champion once.

Sarah first swam across the English Channel in 2012 and then in 2016, set a distance record of 80 miles in 56 hours, non-stop, across Lake Powell in the USA.

These both set her up ready for her latest challenge of swimming across the English Channel not once, not twice, not even three times, but four times in total, non-stop!

English Channel: The history of swimming the Channel