Pokemon
Ash Ketchum, hero of Pokémon anime, has been working hard for over TWENTY years and it's finally paid off! He's now a Pokemon Master.

Since 1997, Pokémon superstar Ash Ketchum has been travelling far and wide in an attempt to catch 'em all.

Yet, in all 22 years of training and battling to be the best, Ash has always fallen short and been defeated by stronger trainers in Pokémon League tournaments.

But his fortune has suddenly changed and his dream of becoming a Pokémon Master has finally come true!

In the latest episode of "Pokémon the Series: Sun and Moon," Ash wins the championship competition of the Alola League.

This epic moment is the first time the main character has won an official Pokémon League tournament.

Get loads more on Pokémon

Here's what happened when Pokemon Masters tried to launch early

Could this mystery glitch be a new pokemon?

Fans have taken to social media to congratulate Ash on this huge achievement!

One said "History moment right there" and another couldn't hide their excitement with "ASH FINALLY DID IT GUYS!" 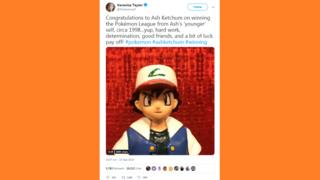 Veronica Taylor, the actress who voiced the original English version of Ash in the first eight seasons, also sent her congratulations. "Congratulations to Ash Ketchum on winning the Pokémon League from Ash's 'younger' self, circa 1998...yup, hard work, determination, good friends, and a bit of luck pay off!" she tweeted Sunday.