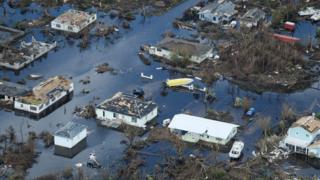 Getty Images
The Bahamas has been badly affected by hurricane Dorian

Recent examples of extreme weather have been linked to climate change - and they're said to be happening sooner than expected.

The UK's ex-chief scientific advisor called for the UK to bring its climate change targets forward by 10 years.

"We predicted temperatures would rise, but we didn't foresee these sorts of extreme events we're getting so soon," Prof King told the BBC.

Do you think adults need to do more to protect the planet?

Here's why scientists are worried about Greenland's future

Could scientists have predicted the extreme weather?

Climate change experts say that climate models, which use mathematical formulas to work out what might happen, have been successful in predicting the rise in the global temperature.

However, the models aren't advanced enough to forecast events like the heatwave Europe experienced this year or the very recent hurricane Dorian which swept across the Bahamas.

Other examples of extreme weather include ice melting at the North and South poles , droughts and floods in Tasmania, Arctic wildfires and cyclones in Mozambique.

Dr Friederike Otto from Oxford University is an expert on how extreme events are linked to climate change.

She told the BBC that before climate change, a heatwave like the one Europe experienced earlier in the year might happen once in 1,000 years.

However, the impact of the current climate crisis means these types of events are likely to occur more often.

"With European heatwaves, we have realised that climate change is a total game-changer. It has increased the likelihood (of events) by orders of magnitude." Dr Otto said.

"It's changing the baseline on which to make decisions. How do we deal with summer? It is very hard to predict," she explained.

Amazon fires: Put your questions to a BBC expert