Simeone: Sporting parents and their kids 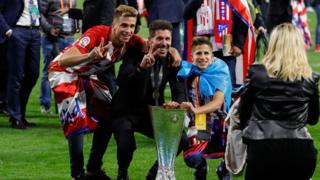 The 16-year-old has moved from River Plate in Simeone's native country, Argentina.

It's not the first time a member of the Simeone family has followed in their father's footsteps. Simeone's other son, Giovanni, plays for Italian side, Cagliari.

With that in mind, here are some other super sporting parents and their equally skilful kids. 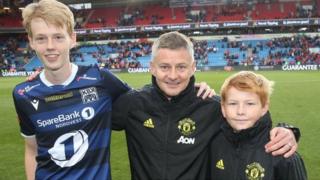 Imagine being a footballer and taking on your dad's team!

That's exactly what happened to Ole Gunnar Solskjaer's son Noah when he played against his dad's squad in a pre-season friendly.

Solskjaer was confirmed as the new Manchester United manager in December last year.

Noah currently plays for Norwegian football club Kristiansund and came off the bench for his debut there late on in the game. 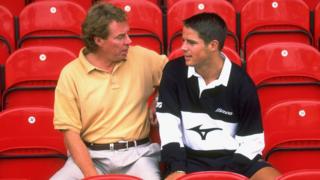 Harry Redknapp was the manager of Bournemouth when he decided to sign his 16-year-old son, Jamie, in 1989.

Within a year, Jamie had been snapped up by Liverpool.

Redknapp went on to play over 200 times for the club and his dad Harry went on to manage clubs including Portsmouth, Tottenham and Queens Park Rangers.

Jamie and Harry aren't the only sporty members of the family. Frank Lampard is Harry's nephew and Jamie's cousin.

Just think how good their family footy matches must be! 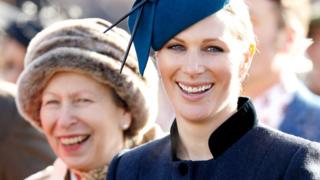 Whoa! You'll neigh-ver believe this royal mum and daughter who have some pretty impressive sporting achievements.

Princess Anne is the only member of the royal family to appear at the Olympics. She was a really successful equestrian athlete.

In 1971, she was even named as the BBC's Sports Personality of the year.

Her daughter, Zara, was also successful in the equestrian world.

She followed in her mum's footsteps by becoming European and World Equestrian Champion on her horse Toytown - and she was also named BBC Sports Personality of the Year! 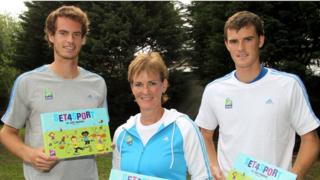 Before coaching her sons to stardom, Judy played tennis professionally and represented Great Britain at the world student games.

In 2017, Judy was given an OBE for her services to tennis.

We wonder how much of a racket(!) she makes when her sons do well! 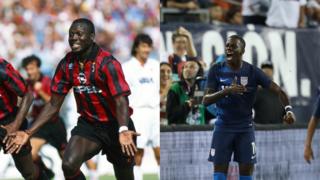 Before becoming the president of Liberia, George Weah was one of the best footballers around.

In 1995 he was named the FIFA World Player of the year and, to date, he's the only African player to win the Ballon d'Or.

His 19-year-old son Timothy has followed in his father's footsteps, becoming a professional footballer.

In 2018, Timothy and George lined up on opposite sides for a friendly match to honour the career of Weah senior.

George played for Liberia and Timothy played for the country of his birth, USA.

In total, Timothy has played eight times for the USA. 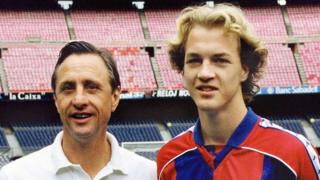 Johan Cruyff is considered both one of the greatest players and managers of all time after successful spells in roles with both Ajax and Barcelona.

In 1999 he was voted European Player of the Century.

His son Jordi was also a talented footballer. In 1994, Johan decided to give the then 18-year-old his first team debut.

In his first season with Barcelona, Jordi scored 11 goals. However, when his dad left the club so did Jordi and he was signed by Manchester United.

Will these kids be sports stars like their parents?

Sharenting: Holly Willoughby and Robbie Williams against the idea