The 'flying fish' robot that could help out in floods 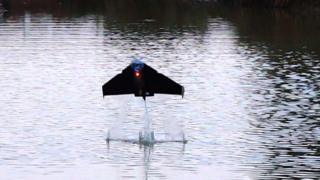 A robot that launches itself from water and glides in the air like a 'flying fish' has been created by scientists at Imperial College London.

The robot leaps into the air using the water and a chemical stored inside itself to create a powerful gas that propels it up to 26 metres in the air.

Engineers say the new robot could be used to collect water samples in places that are dangerous or difficult to reach, such as floods or ocean oil spills.

It's exciting news because the amount of force, or energy, needed to launch a robot from water into the air is huge - so up until now it's been impossible to achieve with small robots as lead researcher Mirko Kovac explained.

Mirko said: "Water-to-air transition is a power-intensive process, which is difficult to achieve on a small-scale flying vehicle that needs to be lightweight for flight,"

The robot has a pump that sucks in water. The water and a special chemical inside the bot combine to produce a gas. As the gas expands, it pushes the water out as a jet, which propels the robot clear of the water and into a glide.

The team tested the robot in a lab, a lake, and in a wave tank, showing that it can leave the water's surface even under relatively rough conditions.

The team's invention creates an upward force 25 times the robot's weight, which means it can overcome huge waves.

So the invention could be used to collect water samples during oil or chemical spills at sea or test floodwaters for pollutants when it's too dangerous for humans..

Women and girls in science: How do scientists tackle air pollution?

A robot 'dog' that opens doors?!