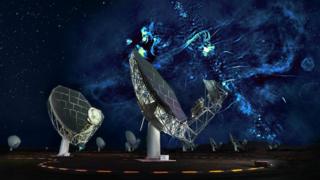 An international team of space scientists have discovered a pair of huge radio-emitting bubbles in space.

The massive hour-glass like structure was spotted by astronomers in the middle of our Milky Way.

It is thought to stretch across hundreds of light years and is considerably bigger than all the other structures which currently exist in the centre of the galaxy.

The team of scientists who made the discovery believe the structure was created following an energetic burst that erupted near the Milky Way's supermassive black hole millions of years ago. 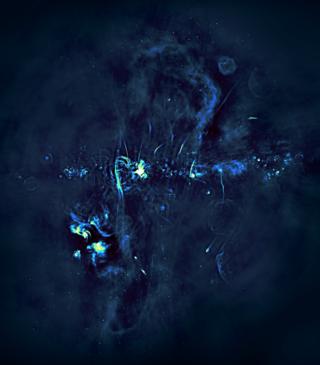 "The centre of our galaxy is relatively calm when compared to other galaxies with very active central black holes," said Ian Heywood from Oxford University. "

Even so, the Milky Way's central black hole can from time to time become uncharacteristically active, flaring up as it periodically devours massive clumps of dust and gas. It's possible that one such feeding frenzy triggered powerful outbursts that inflated this previously unseen feature."

Kids get their work on to ISS

The structure was discovered by the South African Radio Astronomy Observatory (SARAO) MeerKAT telescope used by Professor Heywood and his team of researchers to map regions in our galaxy.

The scientists searched for radio emissions which point to energetic regions in space.

We can't see these regions from Earth as visible light is blocked by dense clouds of dust, but the MeerKAT telescope is able to see the radio emissions which penetrates through these clouds.