Gambling and gaming: 'Loot boxes should be banned' 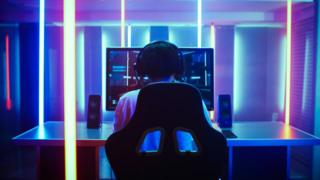 A new report from a group of MPs is calling for a ban on the sale of video game loot boxes to children.

The MPs say big gaming companies have a duty to protect players, in particular children, from spending money on virtual items like loot boxes, as well as the potentially harmful effects of playing video games for long periods of time.

Head of the group of MPs Damian Collins says: "Loot boxes are particularly lucrative [meaning they make a lot of money] for games companies but come at a high cost, particularly for problem gamblers, while exposing children to potential harm."

He added: "It's time for [gaming companies] to be more responsible in dealing with the harms these technologies can cause for some users."

The Department for Digital, Culture, Media and Sport select committee report is now urging more to be done to tackle these issues.

What is a loot box?

The boxes often contain skins, which are either special costumes which players can put onto their character, weapons or armour.

The contents of the box are typically accessed by a player spending long periods of time playing or by paying a fee.

Usually, until a player opens the box, they don't know what is in it. This is why critics of loot boxes say it encourages gambling and spending money to keep opening the box until you get what you want.

What did the report find?

An investigation into how games organisations are run found that loot boxes make up a huge proportion of money made by big gaming organisations, despite the fact that they can come at a high cost to players.

Following this, the group of MPs came to the conclusion that the sale of loot boxes to children should be banned altogether.

It also called for the government to regulate the purchase of loot boxes for all other players under a law called the Gambling Act.

Why EA could be in trouble over Fifa player packs

What is the Gambling Act?

The Gambling Act was introduced back in 2005. It is a law which aims to ensure that gambling in the UK is done in a fair, open and legal way.

The law also seeks to protect both children and vulnerable people from the harmful consequences of gambling.

As things currently stand, loot boxes aren't covered by this law - something which the group of MPs think is wrong.

It believes that loot boxes are a game of chance as they can be bought with real money and can contain contents that aren't revealed to players until they've made their purchase.

The committee classes this as a form of gambling - and, as a result, feels should be regulated by the act.

To tackle issues surrounding paid-for loot boxes, the report also suggests that loot boxes should be earned through in-game credits, which would prevent players handing over real cash.

What else has the report called for?

In addition to stricter rules around loot boxes, the report has called for better labelling of video games.

The group argues that games containing loot boxes should carry warnings for parents, which clearly show that they feature gambling content.

It also believes the gaming industry must take some responsibility for harm caused by gaming. It has proposed the introduction of gaming companies needing to pay a special tax, which could be used to help to pay for research into the long-term effects of gaming, including gaming disorders.

What do gaming companies say?

Dr Jo Twist, the boss of UK Interactive Entertainment, has said: "The video games industry has always, and will continue to, put the welfare of players at the heart of what we do."

Kerry Hopkins - vice president of EA games - has defended the company's use of loot boxes, saying that buying them is the same as buying a Kinder egg.

She said the way they are used in the company's games is "quite ethical and quite fun, quite enjoyable to people".