Ghost crabs use teeth in their stomachs to growl at predators 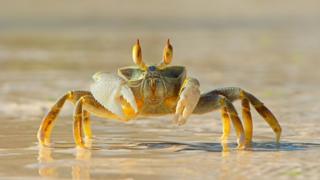 Scientists have made a very unusual discovery about a certain type of crab.

Scientists at the Scripps Institution of Oceanography in California have found that when threatened, ghost crabs use special teeth in their stomachs to growl at predators!

Like lots of other animals, crabs have teeth in their stomachs to grind up food, so this in itself isn't unusual.

But the ghost crab is the first creature that's been found to use these teeth as a way to communicate!

A creepy crab invasion that took over Cuba

When Newsround met two of the world's biggest crabs

It was already known that these special crabs made sounds to scare predators by flexing their claws and grinding them on ridges near their joints,

But when scientists placed the crafty critters in an X-ray machine, they saw their teeth grinding inside their stomach and heard a harsh scratchy sound.

By making the growling noise with their stomach, it leaves the crab's claws and mouth free to scare off any creature that sees it as a potential meal!

What is a crustacean?

These are animals that usually have a hard shell or exoskeleton, and two pairs of feelers. They mainly live in the sea.

Crabs, lobsters, shrimp and barnacles are all types of crustacean.

The word comes from the Latin word crusta, which means shell. 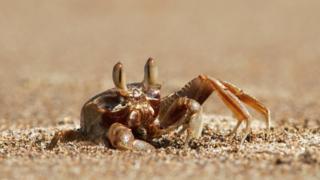 The scientists are excited by the find as it could lead to more big discoveries about the way these clever crustaceans communicate.

Jennifer Taylor, who led the study, said: "It will be interesting to see how our understanding of crustacean communication unfolds."

The genius ways that animals defend themselves