World War Two: It's been 80 years since the conflict started 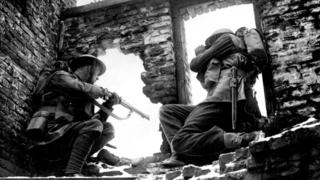 It's been 80 years since the start of World War Two.

Britain and France declared war on Germany and its allies, two days after Germany invaded Poland.

On 3 September 1939, Prime Minister Neville Chamberlain announced via a BBC radio broadcast that Britain would fight against Nazi Germany.

It was the most destructive global conflict in history.

The war lasted for six years, millions of people lost their lives and it had a big impact on the world.

'Why we think it's important to remember WW1'

Why did World War Two start?

Historians disagree about what caused the Second World War.

Some believe it was down to the anger created in Germany following the end of World War One.

That conflict lasted four years and had a long-lasting impact on both Europe and the world.

The Treaty of Versailles was passed in 1919, ending World War One. It held Germany accountable for its role in the conflict and resulted in the country losing land and colonies.

Germany faced restrictions to its armed forces and was required to make repayments known as reparations to rebuild areas that had been affected.

Some historians might blame Hitler's aggression for starting the Second World War, while others might put it down to world leaders, including former Prime Minister Neville Chamberlain, being too weak.

In 1938, Chamberlain introduced a settlement called the Munich Agreement as a way to try and keep the peace and prevent another war taking place. 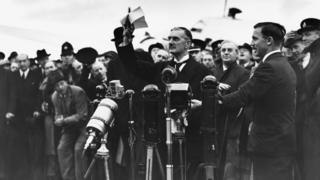 There were many reasons why he did it, including the argument that complaints made by Hitler following the treaty were reasonable and that by giving him what he wanted, it would stop him from going to war.

The agreement stated that the Czechoslovakian region of Sudetenland should be given to Germany, but Adolf Hitler was unable to claim any more land.

Chamberlain believed Hitler would be satisfied with this, but this was far from the case. The agreement failed to stop Hitler from attempting to obtain more land.

In March 1939, the German leader broke the terms of the treaty when he invaded Czechoslovakia. 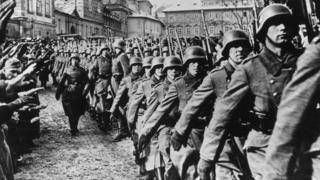 How do we remember WW1?

Growing up in a war zone: Newsround Special