Greta defends herself against internet trolls 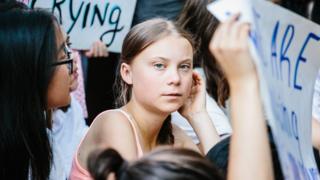 Environmental activist Greta Thunberg has opened up about her Asperger's diagnosis, explaining why she does not frequently speak publicly about living with the condition.

Earlier this week, Thunberg arrived in New York City after spending 15 days at sea in order to attend a climate change summit in the Big Apple.

On Saturday, days after her arrival in the city, the 16-year-old took to social media to address some of the unkind comments she has received about her appearance and "being different".

"When haters go after your looks and differences, it means they have nowhere left to go. And then you know you're winning!" Thunberg wrote on Twitter and Instagram.

"I have Asperger's and that means I'm sometimes a bit different from the norm. And - given the right circumstances -being different is a superpower."

Greta Thunberg speaking to the BBC