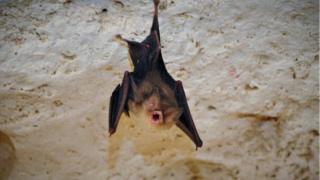 The only known group of a rare type of bat have been given 'manicures' by scientists.

But there's a very good reason for their 'makeovers'!

Coloured nail polish has been used on the Cuban greater funnel-eared bats to help work out how many of them exist.

They're one of the rarest types in the world and they all live in one cave in Western Cuba.

To count the bats, researchers used four different nail varnishes to paint their 'nails'. They created thousands of markings to help them identify each one.

The first results from the study by ZSL (Zoological Society of London) showed that there are less than 750 of them.

The Cuban greater funnel-eared bat was declared extinct until it was rediscovered in 1992 by a group of Cuban scientists. 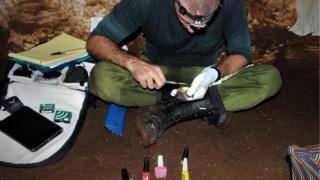 Experts don't know exactly why the bat species is declining. They think they could be vulnerable because they live in hot caves and are now threatened by human intrusion and the collapse of their cave roof. Climate change is also seen as another factor.

Marking bats is typically done with necklaces, arm rings or wing punches, but scientists say these methods can alter behaviour.

"It was time consuming giving each bat an individual manicure, but it's an incredible privilege to get up-close to this amazing animal - and to discover more about them made all those hours painting their nails worth it!"