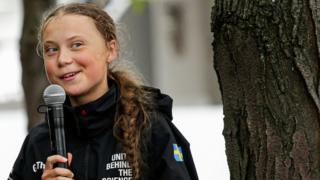 "Our war on nature must end," Greta Thunberg told reporters, shortly after arriving in New York City on Wednesday.

The teenage climate change activist was speaking after making the 15-day, 3,000-mile journey across the Atlantic Ocean by boat.

She travelled to the US in order to attend two climate change summits taking place in the coming months.

The 16-year-old wanted to make the entire journey by sea, rather than flying, to minimise her carbon footprint and reduce damage to the environment. 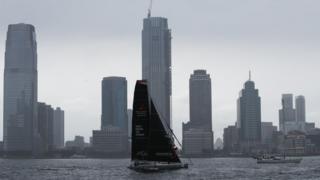 Getty Images
The boat she sailed to the US on was fitted with solar panels and hydro generators making it one of the very few ships in the world allowing trips like this to be emission-free.

When asked by the gathered reporters if she was the person to convince US President Donald Trump about the severity of climate change, she answered with a simple "no".

"I'm not that special," she said. "I can't convince everyone. I'm just going to do what I want to do and what will have most impact. My message for [Trump] is listen to the science and he obviously doesn't do that."

President Trump has previously denied the science of climate change.

"I want to thank everyone... who is involved in this climate fight, because this is a fight across borders, across continents," she said.

When asked about the fires that have ravaged the Amazon rainforest in recent weeks, she said they were a "clear sign we need to stop destroying nature".