Hundreds of thousands of people are expected to take part in protests across Britain this weekend in response to the Prime Minister Boris Johnson's decision to suspend Parliament.

Many people who disagree with the prime minister say his actions will make it easier for the government to push through a no-deal Brexit, although Mr Johnson's supporters have denied that this is the case.

There have already been protests across the country during the last week, with hundreds of people gathering outside Parliament.

Why is this causing so many arguments?

More than 1.6m sign petition against suspension of Parliament

Anti-Brexit campaign group 'Another Europe Is Possible' has organised 32 demonstrations to take place in England, Scotland and Wales this Saturday.

Another campaign group called 'Momentum' has asked its members to "occupy bridges and blockade roads" as part of the protests.

Labour leader Jeremy Corbyn says MPs should also join the demonstrations against the shutdown of Parliament.

Mr Corbyn said "No one voted for Boris Johnson's shutdown of democracy."

He said: "This is why the public outrage at his actions has been so deafening, and why I am encouraging MPs to join public protests opposing this shutdown and the prime minister's threat of a no-deal Brexit."

The government has said that the five-week suspension in September and October will still allow time to debate Brexit. 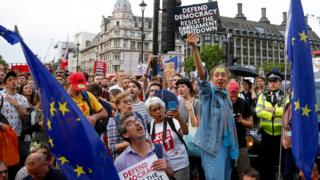 Leader of the House Jacob Rees-Mogg told the BBC that Parliament would normally head into a break for the party conferences in September anyway.

But Ruth Fox, who is the director of parliamentary experts the Hansard Society, said the length of time the suspension is planned for is "significantly longer than we would normally have".

Many critics have said it is an "undemocratic" attempt to stop MPs from blocking no-deal.

A no-deal Brexit means the UK will leave the European Union (EU) on 31 October 2019, without any agreements in place about what the relationship between the UK and the EU will be like in future.

Shutting down Parliament - known as prorogation - happens after the prime minister advises the Queen to do it.

Mr Johnson has urged EU leaders to agree to renegotiate the Brexit deal drawn up by the previous prime minister, Theresa May, and to make key changes that would allow it to be passed by the UK Parliament.

But he has insisted the UK will leave the EU on 31 October, even if no new agreement is reached by this time. 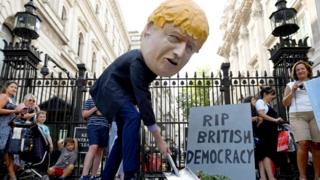 DANIEL LEAL-OLIVAS
This protester dressed up as Boris Johnson and pretended to be 'burying' democracy, as many opponents say that the prime minister's move is undemocratic
Why has Boris Johnson suspended parliament?

On Wednesday, the government requested to suspend Parliament days after MPs return to work, which the Queen agreed to.

BBC royal correspondent Jonny Dymond explained that although it is called "Her Majesty's Government", it was the Queen's role to take the advice of her government ministers, so she would prorogue Parliament if asked to - which has been the case here.

Because it is just a few weeks before the Brexit deadline, a lot of people have said that Mr Johnson has suspended Parliament to try to stop MPs who don't want to leave the EU without a deal from having their say.

But cabinet minister Michael Gove says this isn't true, and that it's so that Mr Johnson can deal with other important issues, like NHS funding. 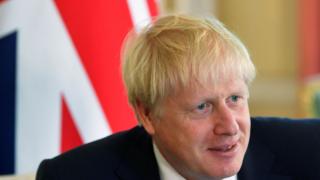 The prime minister said there would still be "plenty of time" to debate Brexit before the scheduled departure date of 31 October.

He added that a Queen's Speech would take place after the suspension on 14 October to outline his "very exciting agenda" and that he did not want to wait until after Brexit "before getting on with our plans to take this country forward".

Reports had suggested that MPs might put forward a vote of no confidence in the government to try to stop a no-deal Brexit on 31 October.

But many say the chance to hold such a vote has been reduced by Mr Johnson's request for Parliament to be suspended from 10 September.

Why are people worried about Parliament being suspended?

On Wednesday evening, protesters gathered outside Parliament in Westminster, chanting and carrying anti-Brexit placards and EU flags, before spreading towards Downing Street.

Labour leader Jeremy Corbyn described it as "a smash-and-grab on our democracy" to try to force through a no-deal Brexit, by leaving MPs without enough time to pass laws in Parliament to stop it from happening. He says he's going to try to stop the suspension.

Some members of the Conservative Party - of whom Mr Johnson is the head - are against the idea too.

House of Commons Speaker John Bercow - who does not traditionally comment on political announcements - described it as a "constitutional outrage". 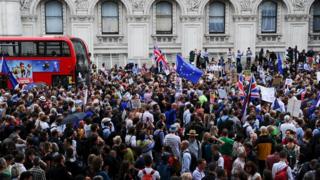 Former chancellor Philip Hammond called it "profoundly undemocratic", while Scotland's First Minister Nicola Sturgeon says Boris Johnson is acting like a "tin pot dictator". She has called on MPs to come together to stop the plan next week, saying that otherwise "today will go down in history as a dark one indeed for UK democracy".

Anti-Brexit campaigner Gina Miller - who previously won a legal battle against ministers over Article 50 - has made a judicial review application to the courts about Mr Johnson's decision. 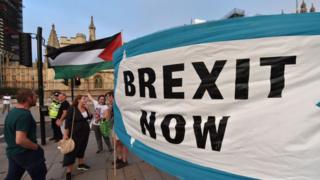 Conservative MP Peter Bone, who supports Brexit, said he would not have supported Mr Johnson if he had proposed a suspension until after the Brexit deadline, but he said this suspension was "absolutely standard procedure".

The prime minister's supporters have dismissed claims that he has done this to manipulate no-deal Brexit.

Cabinet minister Michael Gove has said the suspension was "certainly not" a political move to obstruct those wanting to stop the UK from leaving the EU without a deal.

US President Donald Trump also tweeted his support for Mr Johnson, saying it would be "very hard" for Labour Party leader Jeremy Corbyn to seek a no-confidence vote against the PM, "especially in light of the fact that Boris is exactly what the UK has been looking for".

The leader of the DUP Arlene Foster also welcomed the decision, but said that the way her party works with Mr Johnson's Conservative Party would now be reviewed. 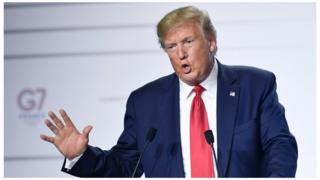 Brexit: Why the Queen's Speech and proroguing Parliament is causing arguments

Brexit: What's a vote of no confidence?