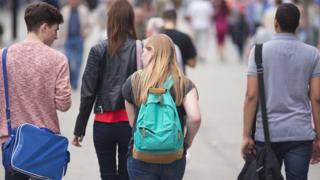 Almost a quarter of a million children in the UK - the equivalent of 219,000 - are apparently "unhappy".

That's according to new figures from The Children's Society, which put together something called the Good Childhood Report every year.

It says that children's happiness with life is at its lowest since 2009.

The report says that the reasons why many children aren't happy relate to things like appearance, friendships and school.

If you can't see the videos in this article, then click here.

Bullying and social media are 'key worries' for young people

'I stopped eating and was out of control'

What big issues are children are worried about?
Body image

Over-13s were significantly less happy with how they look compared to 10 to 12 year olds.

Read more about how body image pressure for boys is affecting their mental health.

One in eight children (11.8%) are also unhappy with school. In fact, the children are more unhappy about school now than at any time in the past ten years.

Other issues highlighted in the survey included child poverty, worrying about having enough to eat and the risk of homelessness.

More than a third (33%) of 10 to 17 year olds voiced concerns about whether or not they will have enough money in the future, with more than a quarter (29%) worrying about having a job.

More from BBC Own it

The wider research suggests that this could be down to a wide range of factors.

These included bullying, not being unable to spend time with friends outside of school, spending too much time on social media and loneliness.

Crime and the environment

About one in five worried about the economy and Brexit.

The Children's Society boss Mark Russell says: "Many young people tell us they feel side-lined and ignored by those in power.

The Children's Society is committed to listening to young people, and working with them to speak up and speak out, to enable every child to thrive - not just survive."

The charity also wants the government to do more to check up on how happy children aged 11 to 18 are, by making checks at schools and colleges.

They hope this would help to improve the experiences of young people and ensure that issues can be recorded and acted upon for future generations.

Where can I get help?

If you are worried about or affected by the issues in this article, there is lots of support out there for you.

Speak to an adult you trust, like a parent, guardian or a teacher.

You can also contact Childline - a counselling charity for people aged 18 and under - on 0800 1111 for free at any time.

Bullying and social media are 'key worries' for young people