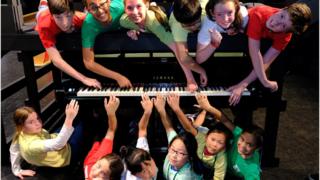 How many people can play a piano at once? Until now the record was 21, but that's just been broken!

Thanks to the ingenious ideas of these kids, 88 young people have been able to play one piano at the same time. There was one pianist for each key of the instrument.

They wanted to make sure that the Guinness World Record they set, would never be broken.

But in order for that many people to reach the piano, they needed inventions which would allow each player to reach their piano key from seven metres away - that's almost the same length as two alligators!

Around 2,500 primary school children from across the UK worked to design mechanical 'finger extenders', and 88 inventions were chosen to be built by engineers.

The ideas were far from boring - everything from flying rabbits, ballerinas, giraffes, trains, popping balloons and pooping unicorns, were made!

After a bit of practice in how to use them, the 88 children, aged between six and 14 years old, gave their special record-breaking performance at Birmingham's International Conference Centre in front of over 500 leading engineers from around the world. 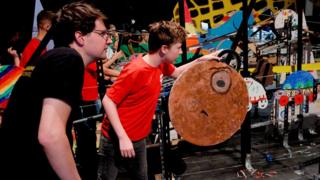 The project began in 2018 when engineers at the University of Cambridge decided to break this world record to commemorate the 500th anniversary of Leonardo da Vinci.

Da Vinci was most well-known for his art work, including the Mona Lisa, the most famous painting in the world. But that's not all - he also came up with a lot of inventions and composed music. 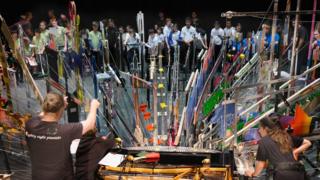 They performed a piece composed in the style of music Da Vinci himself has written, and were supported by the Royal Birmingham Conservatoire.

What a magnificent musical masterpiece!!

Meet Alma, the refugee who taught herself the piano

Eight-year-old passes the hardest piano exam there is