Greta Thunberg: Climate change activist is halfway to the US on her boat journey - send her your messages 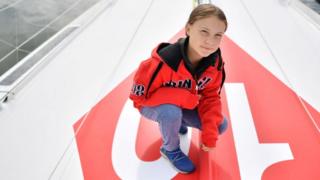 It's a busy week for climate campaigner Greta Thunberg.

The 16-year-old is marking a year since she began her 'School Strike for Climate' protests and she has just reached the halfway point of her big boat journey to the US.

Back in August last year Greta called on school children across the world to miss school every Friday to protest against climate change.

She started the protests to demand that world leaders act to tackle the problem of climate change.

Since then her protests have been joined by millions of children and adults too. 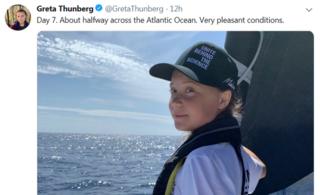 So what would you like to say to the climate activist? Do you have a message of encouragement for Greta on her journey? Maybe you'd like to congratulate her on a year of protests?

Send us a video using the CBBC Buzz app or send in a message for Greta using the comments below.

Greta Thunberg: Why is she travelling by boat?

Greta's halfway through her boat journey to the US

What is flygskam? Greta on 'flight-shaming'

Her latest move - a journey entirely by boat across the Atlantic Ocean - is designed to highlight how travel impacts the environment.

Greta is travelling from the UK to America to attend two climate conferences there. But the activist will not travel by aeroplane, or by cruise ship because of the effect these types of transport can have on the planet. Both modes of transport use non-renewable fuel, cause pollution and release carbon into the atmosphere.

Should football have kick-ins rather than throw-ins?

Clean Air Day: How does pollution affect us?