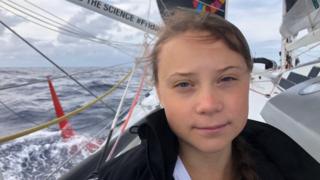 Twitter/@GretaThunberg
Greta will be at sea for two weeks

Greta Thunberg has reached the halfway point on her journey across the Atlantic Ocean.

She is sailing from the UK to New York in the United States to attend two climate change conferences.

Greta set sail from Plymouth in the UK on 14 August on the Malizia II - a special boat designed to sail long distances.

She's chosen to not travel by plane, to make sure her journey will cause as little damage to the environment as possible. 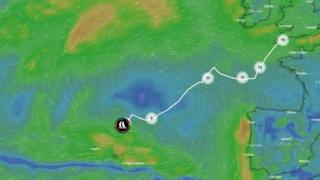 Windy/Team Malizia
One of Greta's team has been updating a live tracker with their location on the journey
What's happened since Greta began her journey?

The conditions on the boat are quite basic - there's no toilet or kitchen on board!

It's also quite a bumpy ride, so before she set sail Greta thought she might feel a bit sea sick.

The sixteen-year-old's posted updates on social media, including one saying "Life on board Malizia II is like camping on a roller coaster!"

So far though, it looks like the journey is going well.

The skipper - or captain of the boat - is Boris Herrmann. A post on his website said: "Everything is going according to plan on board and the crew are enjoying the crossing over to New York. So far, so good: 2000 nautical miles to go!"

On the first day of the two-week trip they even had some company along the way - dolphins! 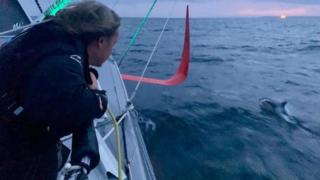