Notting Hill Carnival: What is it?

Notting Hill is a huge street festival that takes place in London every year.

It's all about celebrating Caribbean heritage, arts and culture - including music, food and dancing.

This year it's taking place on Sunday 25 and Monday 26 August. 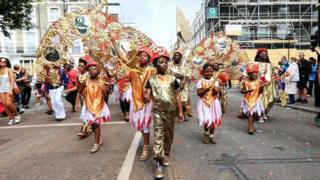 Getty Images
When and why did it start?

The first festival was in 1966 and it was put on by someone called Rhaune Laslett.

Rhaune, who lived in Notting Hill with her mum and dad, wanted to highlight and celebrate the diversity in her area by putting on a festival.

It's got bigger and bigger since then. Organisers today say it's the second biggest carnival in the world, and the biggest one in Europe!

Check out these other global festivals

What Vesak means to you 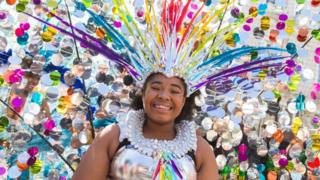 Getty Images
Check out this colourful costume!
What happens?

It's loud, colourful and vibrant!

There's plenty of dancing, singing and processions that take place through the streets.

People spend months working on their festival costumes, and show them off in the huge parade.

There's all kind of music, including steel bands, reggae and salsa artists.

And there's a lot of traditional food to choose from. There are around 240 food stalls selling things like curried goat, roti and jerk chicken. Yum! 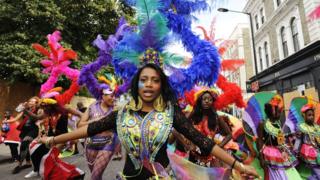 It's thought that around 50 people went to the first festival - this year organisers are expecting up to 2 million!

There are roughly 15,000 costumes on display every year...and every single one is made by hand. It takes around 1 million hours to make and decorate them all!