UK Weather: A month's worth of rain is forecast for one day 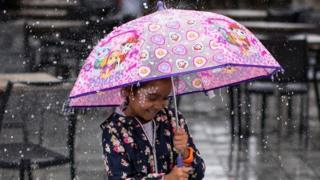 Some parts of the UK can expect nearly a month's rain today.

So don't forget to take out your raincoat and wellies!

Weather forecasters are warning that some places could see flooding and if you are planning to go anywhere by bus or car, all that water could cause problems.

The Met Office say that areas of high ground are expected to see the worst weather.

Flood warnings remain in place for areas of UK

Why are showers so hard to forecast? 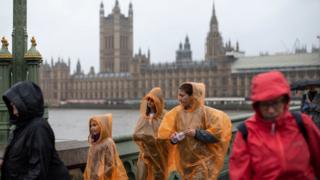 In some areas, up to 80 millimetres of rain is possible - nearly reaching the average rainfall for the whole of August which is 107mm for Wales and 90mm in the South West.

Even though we think of August as the height of the summer, Met Office weather expert Marco Petagna said it can actually be a fairly wet month.

And we could see more wind too. According to BBC Weather forecaster Sarah Keith-Lucas there could be gusts of around 45mph or even 50mph on western coasts. 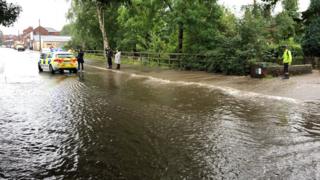 Earlier this month parts of northern England were impacted by heavy rain and flooding.

11 people were rescued from floods in Poynton in Cheshire and homes were flooded and cars stranded in Yorkshire.

A bridge collapsed in Grinton and a full reservoir led to fears about the collapse of the Whaley Bridge dam. 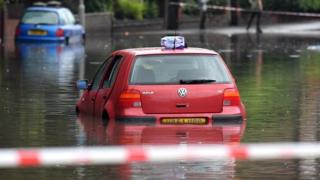 Some people have been wondering if 2019 will be the wettest August ever recorded, but the Met Office said it was too early to tell.

However, experts say next week is due to clear up with warm and sunny weather just in time for the Bank Holiday.