Ariana Grande and BLACKPINK: Are they collaborating for a new song? 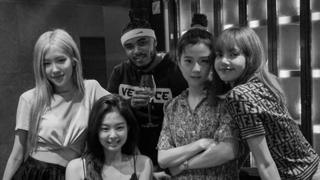 Tommy Brown/Instagram
Could this picture mean new music and a potential collaboration between BLACKPINK and Ariana?

Could we be about to hear a BLACKPINK x Ariana Grande collab?

Tommy Brown, one of Ariana Grande's music producers released a photo of him with BLACKPINK on his social media.

Ariana Grande liked the post and commented lots of hearts in the comments.

This has sent BLACKPINK fans - or BLINKS - into a frenzy, trying to figure out if a) the band will be releasing a new album soon, and b) if there'll be any celebrity collabs involved.

Jisoo, Lisa, Rose and Jennie have been friends and fans of Ariana for a few years now, with them attending each others concerts, singing covers of their songs, and hanging out together at music festival Coachella. 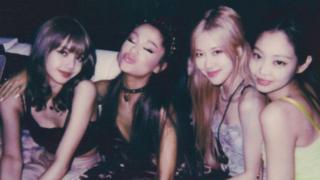 Ariana Grande./Instagram
Ariana shared this picture of her with some of the girls from BLACKPINK at Coachella earlier this year.

They even paid tribute to Ariana Grande and the victims of the Manchester attack at their concert in Manchester earlier this year.

So, fans are speculating that a collaboration between the two superstars could be in the works.

Ariana Grande previously said on Twitter she: "would probably pass out" if she ever got the chance to work with BLACKPINK.

Tommy helped to produce Ariana's hit songs "Thank u, next" and '7 Rings' - so BLACKPINK should be in some pretty safe hands for their new music!

Ariana Grande: 'If you too are hurting, you can push through and are not alone'