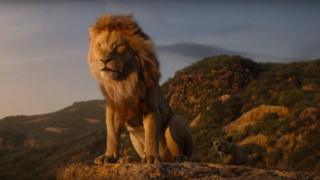 "Hakuna Matata! What a wonderful phrase - When your movie makes loads of money in just a few days."

Ok, they aren't the song's real words but you get the idea!

Yes, the Lion King live-action remake has just been named as the highest-grossing animated movie ever. That means it's made the most money.

The film which starred Beyonce, Donald Glover, Chiwetel Ejiofor and Seth Rogen, has made $1.33 billion (£1.1 billion) at the box office.

What to expect from Star Wars Celebration 2019

The new Lion King film is now the 12th highest-grossing movie of all time, with the film looking likely to overtake other high-earners like Harry Potter And The Deathly Hallows Part 2 which made $1.341 billion (£1.111 billion) and Black Panther which earned 1.346 billion (£1.115 billion) at the box office last year.

It's still a way behind Avengers: Endgame which made $2.8 billion!!

If you don't know the story, have you been hiding under Pride Rock?

It features the life of Simba the Lion Cub, his father Mufasa and friends Timon and Pumbaa, a meerkat and warthog.