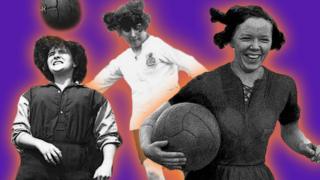 At the end of World War One, women's football was attracting crowds of over 50,000.

In total, there were 150 teams playing to crowds across England.

But then, in 1921, it all stopped. The Football Association decided football was "quite unsuitable for females" and women's football was banned.

It would be 50 years before the ban was lifted.

Women's football on the rise 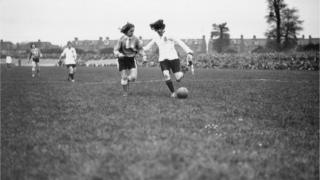 During WW1 lots of the men who played football were sent to fight and the English football league was suspended.

This created a gap for women to fill. They were starting to get jobs in factories for the first time - again because most of the men had gone to fight.

Women had to keep the factories going in order to produce weapons and equipment for the war.

In order to stay fit for this, lots of women from the factories started playing football.

The factories started playing each other for charity.

On Christmas Day in 1917 10,000 people turned up to watch two women's teams playing at Preston.

Dick Kerr Ladies were a team made up of a factory in Preston.

They became one of the best teams in women's football during the war and travelled on tour.

Some of their games attracted over 50,000 spectators.

On Boxing Day 1920, they pulled in a crowd of 53,000 at Everton's Goodison Park ground, with thousands more fans locked outside.

They also had one of England's best goal scorers of all time, Lily Parr. She scored almost 1000 goals in her career. 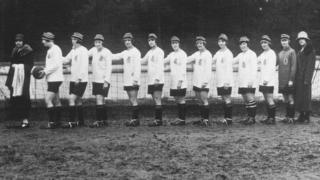 There were worries that the success of women's football would damage the popularity of the men's game once the war was over.

On 5 December 1921, The FA banned it, saying that no clubs could let women's teams play in their grounds.

The ban was lifted almost 50 years later in 1969 and the Women's Football Association (WFA) was formed. 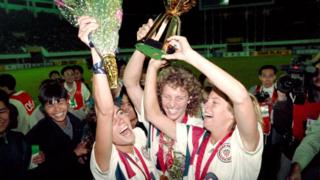 Once the WFA was formed, the results of major women's football finals in Britain slowly started to be included in TV reports.

The first ever women's World Cup took place in China in 1991.

Most of the players in the tournament weren't used to playing in-front of big crowds but the Chinese embraced the tournament - 65,000 people turned out for the final.

In 1997, the FA announced plans to completely re-organise women's football. They wanted to encourage more girls to play at local level to make sure England's next generation could challenge on the world stage.

Last year, it became the first league in Europe to become fully professional.