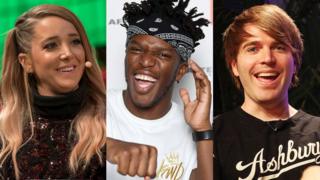 Getty Images
Jenna Marbles, KSI and Shane Dawson have around 50 million subscribers between them

YouTube is the most popular platform for young people, according to a new report.

Ofcom figures show that 16 to 24-year-olds are watching 73 minutes of YouTube every day, compared to the 53 minutes watched by 25 to 34-year-olds.

The organisation - which is in charge of monitoring what goes on TV and radio in the UK - also found that people in the younger age range watch much less live television each day (69 minutes) than those in the next age group up (93 minutes).

Would you rather be a YouTuber or an astronaut?

As well as having a popular website, YouTube's children's app is used by many young people to consume content easily on the go.

In fact, almost half of children aged 3 to 17 years old said that they "watched more YouTube this week" than they did live television, Netflix or Amazon services.

Not only that, but YouTubers' content made up the most popular videos viewed by children up to the age of 11, while music videos became the content of choice for 12 to 17-year-olds.

Does anything in this article surprise you? Do you choose to watch YouTubers' videos the most when you're online, or something else? Do you still watch live television at home or do you tend to choose another service, like Netflix?