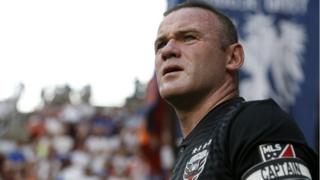 After only a year away from English football, Wayne Rooney is coming back in a shock move to Championship side Derby County.

Before moving, Rooney will finish his second season at DC United in the MLS, joining Derby on an 18-month contract as a player-coach in January 2020.

The former England captain, 33, will bring lots of experience to the Championship. He is Manchester United's and England's leading goal scorer and the second most-capped player for the men's national team. He has also won 16 club titles.

"It is an exciting prospect for him to be joining Derby County and he can bring so much to this squad, both on and off the pitch."

What is transfer deadline day?

The football season is back! Take a look at what's to come

Rooney shared the same enthusiasm as his manager, stating: "I am very excited about the opportunity that Derby County have provided me with.

"I am looking forward to joining Phillip Cocu, his coaching staff and the first-team squad from the start of January."

Rooney also reassured fans of DC United: "I must also take this opportunity to thank DC United, their owners, executives and supporters who have been superb to work with. I want them to know that I will give my all in support of our push for the play-offs."

Rooney has been in great form since moving to MLS side DC United from Everton last summer. The Englishman has scored 25 times in 45 games.

However, Rooney - who has four sons - wanted to move back to England for family reasons.

"While the decision to move home was a tough one, family is everything to us and we make this change to be closer to the ones we love back in England," he said.

"The opportunity to go back home and start the next step of my career in coaching was the factor that made my mind up. I would like to thank everyone at DC United for the incredible support my family and I have received over my two seasons at the club."