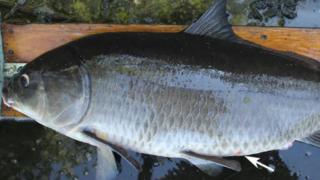 Scientists have discovered a 112-year-old fish, making it the oldest freshwater fish ever found.

The bigmouth buffalo was previously thought to live to 26 years old, but scientists have now discovered it can live much longer after studying hundreds of the species.

Between 2011 and 2018, they caught a large number of the fish. They photographed and tagged them before releasing them back in the wild, so the team could measure the changes over time.

The team removed thin slices of otolith - small structures that help fish balance while they swim - from 386 bigmouth buffalo. They then used a microscope to count the growth rings on each slice of otolith.

Researchers then used bomb carbon dating. Atomic bomb testing in the 1950s and 1960s doubled the amount of carbon in the atmosphere. Biologists could look for carbon in the rings of the otoliths they collected to find out how old the fish is.

In total, five bigmouth buffalo were over 100 years old, but one became the 112-year-old record-setter.

Recently, because of new aging techniques, scientists have discovered many species of fish live longer than originally thought - the Greenland shark, for instance, can live to over 270 years old!

Why do the Queen and Prime Minister meet every week?

What are the new holiday travel rules?