Sharks and marine predators smaller and rarer in habitats near people 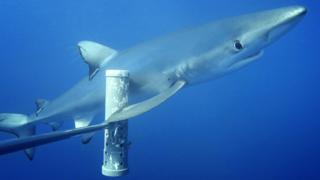 A team of researchers has discovered that sharks and other ocean predators have become much rarer in places nearer to large human populations.

The team also found that the average body size of the predators - which are important for keeping ocean ecosystems healthy - fell dramatically in these areas.

This is believed to be because of intensive industrial fishing of sharks and their food supply. Sea surface temperatures also had effects on predator's average body sizes, leading the researchers to believe that rising global temperatures could be a problem.

Dr Tom Letessier of the Zoological Society of London Institute of Zoology said: "Human activity is now the biggest influence on sharks' distribution, overtaking every other ecological factor."

Large marine predators are generally unable to thrive near to people and is another clear example of the impact of human over-exploitation on our seas.

The team looked at video footage that was taken at 1,041 sites across two oceans. This was to test the biggest possible range of environments that sharks and other marine predators live in.

Using the footage, which was recorded using cameras attached to canisters filled with bait (food for sharks and other fish), the team was able to record 23,000 animals representing 109 species!

The research showed that shallow water habitats are important for lots of different types of marine predator and that they need to be protected to help conservation efforts.

Check out these other stories about conservation

How is Welsh wildlife under threat?

New plan to save marine life in the UK's 'blue belt'

Baby Shark: Why did this song about a family of sharks go viral?