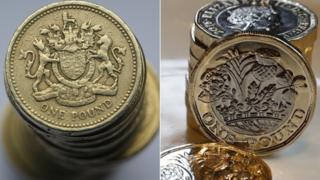 Getty Images
The old-style coin with the current £1 coin

There are 145 million old-style coins have not been returned to the Royal Mint even though people have not been able to use them for almost two years.

The round £1 coin was demonetised in October 2017. Over the last year, 24 million have been returned to the Royal Mint, leaving 145 million missing.

The Royal Mint, which creates the coins, says the round £1 coin can still be deposited at most high-street banks.

Millions of the round £1 coins were melted down to help create some of the new ones at the Royal Mint.

The current 12-sided £1 coin was introduced on 28 March 2017 partly because the old-style of coin was easily illegally copied.

The current coin is described by the Mint as the most "secure in the world" and has a hidden high-security feature built into the coin to stop it being copied.

Fun facts about the new £1 coin