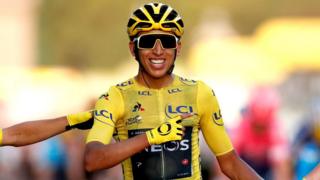 His victory had been secured after he finished the 20th stage in the yellow jersey.

"To finish second behind a team-mate makes it OK," said he said.

"Thanks to all my team and thank you G [Geraint Thomas] for giving me the opportunity," said Bernal. "I'm the happiest guy in the world. I have just won the Tour de France and I can't believe it."

Should helmets be compulsory for cyclists?

The Tour de France is a very steep cycling race, which takes place primarily in France.

The 2019 race has been affected by some extreme weather, which meant some of the sections were shortened.

Before the final part or 'stage' of the race - Stage 21 - began on Sunday, many people were already saying Egan Bernal was the winner.

This might seem a bit confusing, but it basically comes down to a tradition that the race leader is not challenged in the final stage. This means the 21st stage, which ends in Paris, is treated like a procession rather than a race.

Even though there is nothing in the rules to say contenders can't overtake the leader, nobody ever does and it would probably be seen as bad sportsmanship.

It was the seventh time in eight years that a British-based team has taken the title. Bradley Wiggins was the first British winner of the race in 2012. 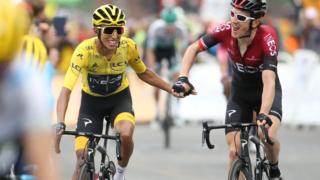