This summer, more children than ever before will need to use food banks to get the food that they need, according to research.

Fareshare - a charity that tackles hunger and food waste - is giving food to 400 holiday clubs this year, compared to 350 last year, which is an increase of 15%.

Currently in the UK, there are around 4.1 million children in the UK living in poverty, meaning that there isn't enough money to buy the food that they need. As a result, children may miss meals or go for even longer without enough food.

During the summer holidays, when children don't get free school meals that might be offered at school, this becomes more of a problem.

Food bank charity The Trussell Trust said it distributed 87,496 food parcels to children while they were off for their school holiday in 2018.

But the organisation said it is expecting this figure to rise to nearly 100,000 this summer.

The government says that it is investing £9 million so that 50,000 children are offered meals and activities during the school holidays, while the Scottish Government is spending £340,000 so that six charities can offer the same.

Read on to find out more about this issue.

What is a food bank?

What does 'poverty' mean?

Find out more about why poverty is an issue in Britain

'I get hungry and I find it hard to concentrate'

During term time, many schools offer free breakfasts for pupils, as well as a lunchtime meal. But when the holidays come along, some children miss out.

Hayley went to one school where around one in four of the pupils say their family have used food banks.

At the school's breakfast club, some of the children spoke to her about what it is like to not have enough to eat.

One girl said: "I get hungry and I find it hard to concentrate."

Another girl told Hayley: "We're a big family and we've not got a lot to eat."

"There's lots of families like us," said another girl.

Some children explained how food banks provide them and their families with food that they need.

Paige and Christopher know what it's like to go without food sometimes.

Paige told Hayley: "One day during the holidays, Mum didn't have that much food, so we just didn't have any dinner."

They both get help from charities, but they also help other people.

Paige goes to a community centre once a month where she cooks healthy meals for families who are hungry.

Christopher, along with his mum, gets leftover food and makes meals for other people. They make things like stews, sorbets and banana loaf.

They went to see Anne Longfield - the Children's Commissioner for England - to tell her some of their ideas to help other people like them. 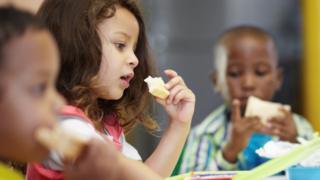 Paige thinks that rent costs should be lower so people don't have to spend so much to have somewhere to live.

They also think that schools should stay open during the holidays and offer meals for children who need it.

Anne Longfield said she would talk to ministers about their ideas and make sure that their message is heard.

Paige said she was "proud" to talk to Anne because they were speaking up for other children who were in the same situation.

If you are at all worried about anything that you have read in this article, then speak to an adult that you trust. It might be a teacher or a member of your family. You can also ring Childline for free on 0800 1111.