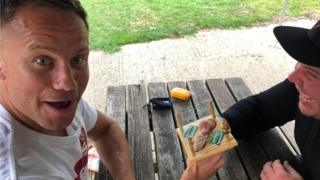 Paul Browse, on the left, took home the men's title in the World Thumb Wrestling Championship for the fourth time

The annual World Thumb Wrestling Championship took place in Norfolk over the weekend.

Ms Coleman actually took the title off her daughter who had won last year, but was unable to attend the contest this year.

"I'm sure if my daughter was here I wouldn't have stood a chance!" she said. 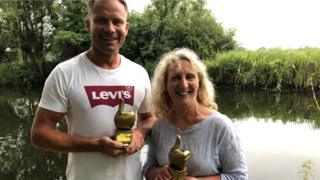 Paul and his mother-in-law Janet Coleman with their trophies

Eight children and 24 adults took part in the contest this year.

Read on to find out more about this competition and some more unusual contests. 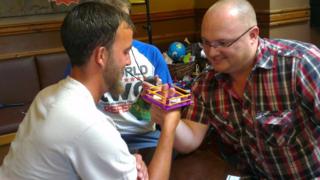 The Thumb Wrestling World Championship takes place in Norfolk each year. This year was the 11th tournament.

The sport of thumb wrestling was thought to have originated in the UK, and since 2009, the Championships have been a way to put people's thumbs to the test!

Players compete using only their thumbs in a specially-built mini wooden wrestling ring.

In order to win competitors must pin their opponents thumb down and hold it there until they've said "1, 2, 3, 4, I won the Thumb War".

Competition organiser Rory Van Bellis said he set up the "quirky" contest to put the area on the map. 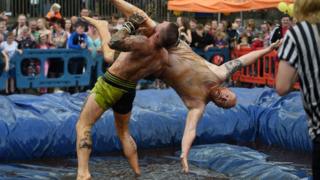 If you like slightly lukewarm gravy and wrestling, then the World Gravy Wrestling Championship is for you!

Held in Lancashire each year, the competition helps to raise money for locals charities.

The first competition was held in 2007 and the rules state that all contestants must wear fancy dress!

After each match, competitors get hosed down by local firefighters, and the champion will get their name engraved on a trophy that they can keep for one year. 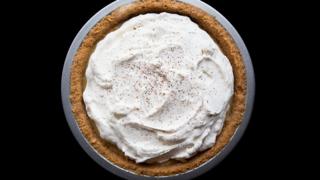 Teams from across the world come together each year to compete at the World Custard Pie Championship.

The championships are held in Kent and first began around 50 years ago!

All custard pies must be thrown with the players left hand.

Teams score points against each other based on where the thrown custard pies land. 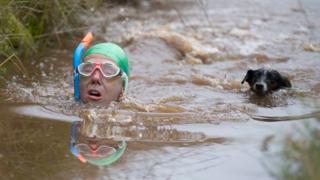 One of the more unusual, smellier championships is the World Bog Snorkelling Championship.

Invented in the Welsh town Llanwrtyd Wells in 1976, bog-snorkelling involves competitors swimming through a water-filled trench in a peat bog, with the fastest being the winner.

People come from all over the world to join in the unusual sporting event.

The current world champion and world record holder is Neil Rutter who achieved a time of 1 minute 18.82 seconds in the 2018 championships, breaking the previous world record of 1 minute 22.56 seconds set in 2014.