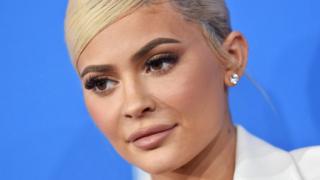 This makes her the highest-paid Instagram influencer of 2019, according to scheduling tool Hopper HQ.

Kylie - with her 141 million followers - came out top of the same list last year, when she was reportedly earning around $1 million (£800,000) for a post to her followers.

The figure is worked out based on different factors, such as the number of followers a celebrity has, and how much people share or comment on their content.

Selena Gomez, Dwayne 'The Rock' Johnson, Beyoncé, Taylor Swift, Neymar and Justin Bieber made up the rest of the top 10.

The moment she wiped £1 billion off Snapchat's value

When an egg became more popular than Kylie Jenner

The culture of paying celebrities huge amounts of money to post content to their millions of followers has been heavily criticised.

Some say fans may change their behaviour or opinion based on the post's content, when the celebrity they idolise may only have been posting it for money.

Critics also say it gives young people unrealistic or unambitious career aspirations when they see the money that celebrities are making from posting.

But others think it is less of a problem in a celebrity culture industry that is already worth billions of pounds.

Where did Kylie's sisters feature?

We want to know what you think. Should celebrities be paid this much money for sponsored posts?

What do you think of this practice? Let us know below.

Is that meme really an ad?

Iceland is fed up of disrespectful Instagrammers ruining nature