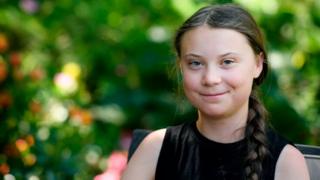 Climate activist Greta Thunberg has made her musical debut by recording an essay on climate change for The 1975's new album.

The 16-year-old calls for action to tackle the climate change emergency, saying: "We can still fix this. We still have everything in our own hands."

The track - called The 1975 - will open the band's album Notes on a Conditional Form.

Over instrumental music, Greta begins by saying: "We are right now in the beginning of a climate and ecological crisis. And we need to call it what it is. An emergency."

Find out more about what it is

This group wants politicians to do more about climate change

She continues: "We are facing a disaster of unspoken sufferings for enormous amounts of people. And now is not the time for speaking politely or focusing on what we can or cannot say. Now is the time to speak clearly."

Since staging a School Strike for Climate in 2018, the 16-year-old has become one of the world's most famous climate change activists, inspiring students and speaking to governments in many different countries.

In the essay, she reinforces the message she has given in all of her speeches - that more needs to be done to solve the climate crisis.

"Today we use about 100 million barrels of oil every single day," she says. "There are no politics to change that. There are no rules to keep that oil in the ground, so we can no longer save the world by playing by the rules, because the rules have to be changed, everything needs to change, and it has to start today." 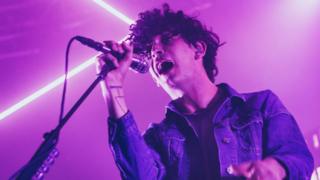 Getty Images
Matt Healy of The 1975

She says: "The main solution is so simple that even a small child can understand it. We have to stop our emissions of greenhouse gasses."

At the end of the track she calls for everyone to take action ending with the words: "It is time to rebel."

The 1975 - who won Best British Group and Album of the Year at the 2019 Brits - have opened all three of their albums with an instrumental track titled The 1975, but this is the first time that it features speech.

All the money from the track will go to environmental campaign group Extinction Rebellion at Greta's request.