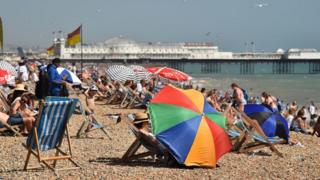 Yesterday broke the record for the UK's hottest July day, with temperatures reaching 38.1C in Cambridge.

The Met Office had predicted temperatures could reach up to 39C in southern and eastern England, which would have made it the hottest UK day ever recorded, but it didn't quite get that warm.

The record for the hottest temperature ever recorded in the UK stands at 38.5C recorded in Kent in 2003.

More on the heatwave

Why is it so hot?

Why can't phones take the heat?

Make sure you're staying safe in the sun

Some rail companies warned people to be careful whilst travelling or not to travel at all, as some train tracks were being affected by the extreme heat, causing severe delays.

The same warnings have been issued for today as rail companies expect further travel chaos.

Public Health England also put a level three heat health watch in place for eastern areas of England, to highlight to people that they need to make sure they're taking care of themselves in the hot weather.

This includes wearing a high-factor suncream, drinking plenty of water and seeking out shade during the hottest parts of the day.

Belgium, Germany and The Netherlands all recorded their hottest ever temperatures on Wednesday.

Heatwave: How do animals keep cool in the heat?