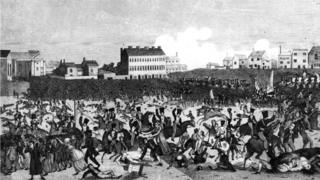 On 16 August 1819, thousands of people gathered in Manchester to take part in a peaceful protest to ask Parliament for a fairer political system and more voting rights.

But the day ended in tragedy, with the Peterloo massacre.

Many people were injured and some even died in the violence. Reports of the numbers killed vary, but it's thought that up to 18 people lost their lives.

Today, the UK is remembering 200 years since this event in history.

Life in the UK in the 19th Century was very different to today.

Many people were very poor. The problems had been made worse because the price of bread had gone up causing a lot of people to go hungry.

But there were also many rich people in the country, which caused a big divide in society.

Learn more about the Battle of Waterloo

How did World War One change the world?

Wealthy people found great success in cities like Manchester as a result of the Industrial Revolution. But the poor people shared very little of this money.

Manchester had become a centre for the cotton industry. The city had great sources of power to keep the factories running - for example, streams that ran down the hills around the city and the nearby coal mines.

Learn more about the Battle of Waterloo

How did World War One change the world? 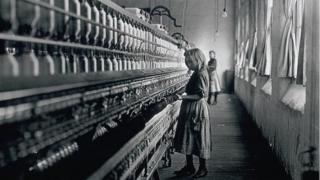 People's History Museum
Manchester became the home of the cotton industry in the 19th Century, which is why the city was nicknamed 'Cottonopolis'

Not only did they have to work in difficult conditions, but they experienced poverty and were forced to live in cramped areas known as slums.

Workers lacked access to clean water and sewers, and their employers failed to provide them with any support.

Such terrible conditions meant that diseases spread easily and many people died at a young age. 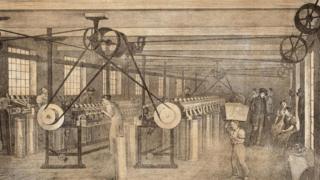 People's History Museum
Workers played a huge part in running the cotton factories
What other problems did the people of Manchester face?

In addition to the poor working and living conditions, workers experienced a number of other issues:

What led to the Peterloo massacre?

Manchester workers were desperate for things to change.

They wanted a fairer political system and the right to vote. 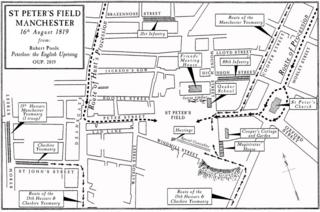 Around 60,000 people came together at St Peter's Field in Manchester to take part in a peaceful protest.

They wanted to bring their requests for rights to Parliament. 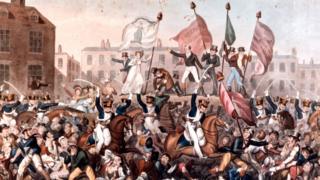 However, they were met with force after the authorities gave orders to soldiers to arrest the leaders and put an end to the protest.

How many people were affected?

Hundreds of people were injured as a result of the violence and it is thought that around 18 people were killed.

This event became known as the Peterloo Massacre. The 'Peter' part of the name came from the location of the event in St Peters Fields, and the 'loo' part coming from the Battle of Waterloo, fought against France in 1815.

What was the result of the Peterloo Massacre?

Thirteen years later, politics in the UK started to change.

Manchester finally got its voice in Parliament and for the first time, the city had its own MP.

But it would be nearly a century until every person over the age of 18 in the UK was given the right to vote.

Why is the bee a symbol of Manchester?