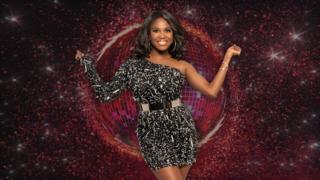 The new Strictly Come Dancing judge has been announced as Motsi Mabuse! She will join the judging panel for the next series, which hits our screens this autumn.

Motsi is a former German Latin Champion and South African Champion in 2009 and 2010.

She will replace Dame Darcey Bussell in the next series.

Motsi has been a judge on Let's Dance - the German version of Strictly Come Dancing - since 2011, after joining the show in 2007 as a professional dancer.

If you recognise her surname, that's because she is the sister of Strictly dancing pro Oti, who was also a dance captain on The Greatest Dancer.

Motsi was expected to become a lawyer and join the family law firm, but she loved dance too much and her passion for it took over while she was studying at the University of Pretoria in South Africa, where she was born.

"I am absolutely overjoyed to be joining the Strictly judging panel," she said. "I have so much respect and admiration for the other three judges and hope to add my own bit of sparkle to the show. I can't wait to get started!"

We don't know which celebrities will be taking part yet, though.

Who do you want to see in the ballroom this series? Let us know in the comments below!

Strictly Come Dancing and Greatest Dancer: How much do you know about Oti Mabuse?

The Greatest Dancer behind the scenes