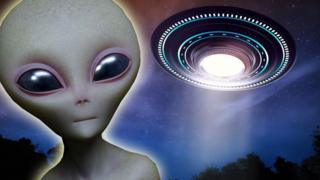 A secret military base in the US is the subject of several conspiracy theories, many of them involving aliens.

Area 51 is a real US base, located in the Nevada desert, and for years there have been rumours that scientists there are storing UFOs and extra-terrestrial life!

Recently, Facebook has taken down an event page for people who wanted to go there. It was called 'Storm Area 51, They Can't Stop All of Us'. Over two million people had replied to say they were attending the event, but Facebook deleted the page.

The event creator Matthew Roberts posted a screenshot on his personal page of the notice Facebook sent him, which said they had closed the event down because it "went against [their] community standards".

The event might have been a joke, but any plan to storm a military base isn't a good idea and the US Air Force warned people not to go near it.

The truth is out there - on the Newsround website

What would you say to an alien?

Area 51 does exist. It is a real-life secret base and that's not so secret. What we don't know is what exactly goes on inside.

The base is used by the US Air Force for test flights involving stealth planes. However, lots of projects and research being carried out within the facility remain secret.

That doesn't mean that there is necessarily little green creatures hiding inside the base, but up until six years ago, the US Central Intelligence Agency - better known as the CIA - didn't even admit that the facility existed.

Confirmation of the base's location - about 80 miles northwest of Las Vegas - and its first official mention came in 2013, when the CIA de-classified a report on the history of the Lockheed U-2 spy plane, which was tested at Area 51 during the Cold War.

In the 1950s, there was an increase in UFO sightings in the area, but this was around the same time that the U-2 planes were being tested. Information about the planes was classified, so the US Air Force couldn't give an explanation of what people were seeing in the sky, because it was a secret. 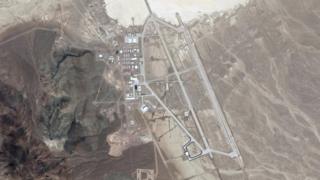 Until recently, satellite images of the base were also censored. But since 2018, Area 51 has been visible on Google Maps.

Of course, people speculated about the location of the base long before it became public knowledge.

It has been the subject of many sci-fi films and the area near to Area 51 has become an unofficial tourist attraction. Many restaurants and shops there sell alien merchandise relating to the base. 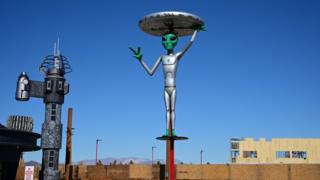 In 1947, a US Army Air Forces balloon crashed near Roswell, New Mexico, but lots of people think it was a government cover-up and it was an alien spaceship that actually crashed.

Reports at the time stated that a 'flying disc' had been recovered, but in 1994 it was finally revealed that a balloon had crashed and was part of a top-secret project called Mogul. The project was testing technology that could detect Soviet Union nuclear bombs.

However, that hasn't changed the mind of conspiracy theorists who think the 'alien craft' and the extraterrestrials inside it were taken to Area 51 for examination. 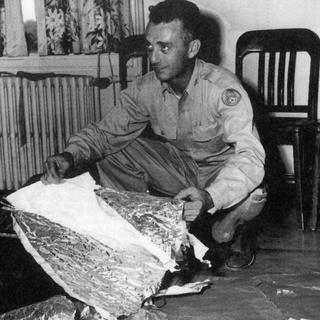 Getty Images
The Air Force says this wreckage, recovered near Roswell, New Mexico, came from a radar target
Do Aliens exist and are they at Area 51?

Many experts believe that alien life, in some form, most likely does exist somewhere in space.

They just probably aren't in a base in Nevada - or much like the green creatures we see in sci-fi films.

In 1989, a man named Robert Lazar claimed he had worked on alien technology inside Area 51.

Lazar said he had seen medical photos of aliens inside the base and that the US government used the facility to examine UFOs. However, Lazar didn't provide any hard evidence and several scientists have discredited his claims.

The Air Force did investigate UFOs under Project Blue Book from 1947 to 1969, but the headquarters for the project was at an Air Force Base in Ohio - not Area 51 in Nevada.

Project Blue Book came to the conclusion that none of the UFOs that were investigated were a threat to US national security and there was no evidence to show that sightings described as 'unidentified' were spaceships flown by aliens. 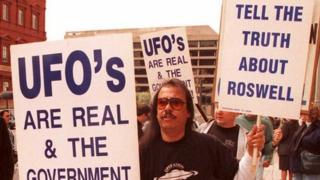 That said, there are many millions of worlds that could be home to life in the universe.

At a recent conference in Barcelona, Professor Brian Cox said: "There are two trillion galaxies in the universe, so it is incredible that there isn't life out there. We estimate that one in 20 stars in our own Milky Way has Earth-like planets. "

The probability of there being life elsewhere is called the Drake equation. This is nothing to do with an international, multi-award winning rapper, but an equation written in 1961 by someone called Dr Frank Drake.

Dr Drake came up with a mathematical equation that predicts the likelihood of intelligent extraterrestrial life in the Milky Way.

So when it comes to aliens and the millions of stars and worlds in the galaxy, the truth is out there, somewhere. Probably.

Brian Cox's The Planets: Everything you need to know