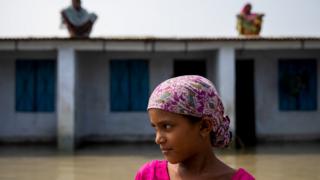 Getty Images
Countries including Bangladesh have been affected by extreme flooding

Millions of people living in South Asia have been affected by flooding after heavy rain.

Since the monsoon season began in India, Bangladesh and Nepal, more than 150 people have lost their lives, while hundreds of thousands have been forced to leave their homes.

Over two million acres - that's more than 1.5 million football pitches - of crops used for food have also been destroyed by flood water.

The police and army are trying to help people in affected countries and are evacuating high risk areas.

Aid agencies and charities are also trying to support people. One of the biggest problems during flooding like this, is not being able to get clean and safe water to drink.

There are concerns that there could be more bad weather and floods on the way. 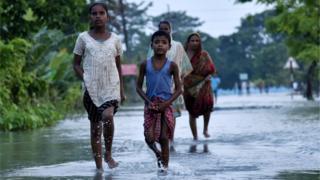 Kerala floods force a million out of homes

Which countries have been affected?

Bangladesh, India and Nepal have all been affected.

In the north eastern state of Assam in India, more than 4,000 villages are flooded. Major roads into and out of the state are blocked because of landslides, which is making it harder to help those in need.

One in 10 people in the state have been affected. In another northern state, Bihar, one million children face difficulties because of the floods.

There is some help for those affected. Around 200,000 people in Bihar and Assam, who've had to leave their homes, are able to stay in temporary shelters. They are also being given much-needed supplies like rice, biscuits and baby food. 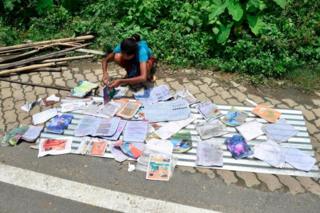 Anindit Roy, from the charity Save the Children India, said: "We aim to reach 15,000 children in Assam immediately with life-saving aid, including temporary shelter, water, hygiene and sanitation services - all of which are essential to protect children from the elements and potential disease."

Just last month, very hot temperatures meant many areas of India nearly ran out of water. The drought also dried up and hardened the land so it can't absorb as much of the heavy rain and floods.

In Nepal, the flooding has meant 17,000 people have been evacuated, according to the country's home ministry.

While, in Bangladesh, 17 out of the country's 64 districts are flooded. Many people live in homes made out of bamboo, mud, or wood - which means that houses they aren't very strong during flooding. Hundreds of thousands of people have been evacuated and are now living in temporary camps and shelters.

Nearly one million people - including more than 400,000 children - have been directly affected. 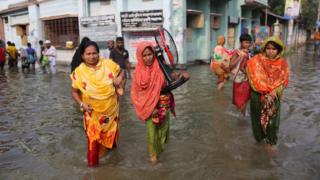 AFP/GETTY IMAGES
What is the monsoon season?

Monsoon rains - and floods happening as a result - are not a new phenomenon.

The rains happen every year during monsoon season, which lasts from June until September.

They're important for farmers who work in hot and harsh environments, but the heavy rain can also cause floods and landslides.

It has been suggested that climate change is making the weather even more extreme.

Dr Ishtiaq Mannan, Save the Children's Deputy Country Director in Bangladesh, said: "We are used to extreme weather here in Bangladesh but what is most alarming is the frequency of flooding caused by heavy rainfall. We believe the increasing intensity and unpredictability of our weather patterns is caused by climate change.

"Children are more vulnerable to disease, injury, displacement and hunger. We are deeply concerned about the safety and well-being of millions of children living in the most remote areas of Bangladesh."

The Partition of India: What happened?

Kerala floods: About 22,000 people rescued in India after heavy rain