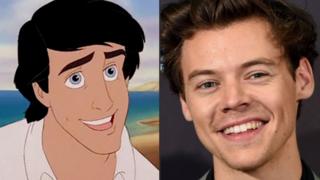 There have been loads of rumours flying around recently that Harry Styles could be in line to play the dashing Prince Eric in Disney's Little Mermaid remake.

But sadly for One Direction fans, the star has turned the part down.

The Press Association have spoken to a source close to the star who says he decided against playing the Disney role.

What do you get if you cross Ed Sheeran with ketchup?

Whoever does get the part will star alongside Halle Bailey, who was announced as taking on the lead role of Ariel.

Production on the film is expected to begin in early 2020 and Disney says there will be more casting announcements in the coming weeks.

We will also have to wait to see who will play characters like Ursula and Sebastian,

So who do you think should play the handsome Prince Eric? Let us know below!

What's the story of Ariel?

The original 1989 animation told the story of a 16-year-old mermaid called Ariel who is more fascinated with life on land, rather than her underwater world.

After falling for Prince Eric, she makes a dangerous deal with a sea witch called Ursula to become a human being for three days - but she has to give the sea witch her voice in exchange.