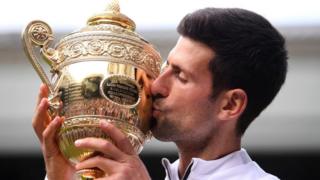 The match lasted a whopping four hours and 57 minutes, making it the longest singles final in the tournament's history.

Djokovic took the final set 13-12 after a tie-break, as a packed Centre Court crowd enjoyed a thrilling contest.

This year's tournament was the first time the fifth-set tie-break was allowed in a singles final.

The final-set tie break was introduced earlier this year after a semi-final match at Wimbledon 2018 lasted six hours and 36 minutes.

South Africa's Kevin Anderson eventually won the final set 26-24 but many players felt this was playing for too long and something had to change.

The 15-year-old taking Wimbledon by storm

Andy and Serena are out of Wimbledon mixed doubles

"It's quite unreal," Djokovic said on winning this year's tournament. He now has a total of 16 Grand Slam titles, just four less than Federer.

Despite the disappointing outcome, Federer remained positive about Sunday's final.

He said: "It was a great match, it was long, it had everything. Novak, congratulations, man, that was crazy."