Newsround has been to South Korea to find out more about K-pop - the music phenomenon that has been taking over the world.

K-pop, which stands for 'Korean pop', is a multi-billion-pound music industry. It is not only popular in South Korea, but also all around the world.

Successful K-pop groups like BTS - who were the first Korean act to have a number one album in the UK charts - are among the most successful groups in the music industry.

Artists can rack up millions of views on YouTube within just a few hours of posting a video. Gangnam Style by Psy is currently the fifth most-watched video on the streaming site, with 3.8 billion views in total so far.

A study has even claimed that BTS is in fact responsible for one in every 13 tourists who visit South Korea.

So what's the K-pop fuss all about and why is being a star in this industry such a big deal?

What is it like to escape from North Korea?

What's it like to attend an internet addiction camp there?

Where did K pop come from?

K-pop was first born in South Korea in the 1990s as a mix between Western and Asian music.

It brings together elements of R&B, pop, hip-hop and rap - both in the music and in the way artists are styled.

It is known for its super-slick production, and the edgy and amazing music videos.

The eye-catching fashion and incredibly synchronised dance routines are very impressive too.

Scooter Braun, who manages Justin Bieber and Ariana Grande, explains: "These larger than life visuals allow fans who may not understand the language to still understand the music." 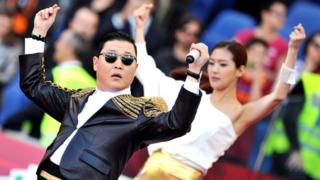 Getty Images
K-pop star Psy helped the genre to become even more popular when he released his catchy tune Gangnam Style back in 2012, which is the fifth most-watched video of all time on YouTube

In order to become a successful genre, K-pop needed to expand outside of Korea.

It finally got its breakthrough in 2002, when a young female artist called BoA became number one not only in Korea, but also in Japan.

This helped K-pop to spread across Asia and, eventually, the rest of the world.

Now, the K-pop industry is worth billions of pounds, with bands winning fans all over the world.

There is even a government department for K-pop in South Korea, which gives the musical genre official support because of how culturally and economically beneficial it is to the country.

Since Gangnam Style by Psy broke the internet back in 2012, the genre saw its popularity grow even more.

How do you become a K pop star?

In order to become a K-pop star, a person needs to be signed as a trainee by a big K-pop label.

But in order to get to this point, many aspiring stars start their journey very young.

They may start by having singing and dancing classes, before attending special schools for students who want to follow in the footsteps of their K-pop idols.

Once they've been successfully signed by a label, the hopefuls can be picked to be a solo artist or part of a bigger group.

But setting out to become a K-pop star is not for the faint-hearted. It is an incredibly competitive industry.

Newsround visited a K-pop school in South Korea attended by around 1,000 students. Out of those, only around 40 to 50 students will manage to make careers in the industry.

"The most difficult thing for me wasn't the physical training," a member of successful K-pop group called iKON told Newsround. "It was the mental side of it and thinking 'will I ever make it?' Not knowing that is the most difficult part."

Some hopefuls may train for up to 10 years before they finally break through in the industry - and others may train for years and never quite realise their dream.

For many though, the risk is worth it. The K-pop industry is worth billions of pounds and K-pop stars can make a lot of money.

Music videos can be streamed many millions of times and stars will be idolised by fans all around the world.

What's it like to be a K pop star?

Newsround went to meet New Kidd - a brand new K-pop band who are just starting out in their career, having recently debuted in South Korea with their new album.

Members of the group had to leave their homes and families behind in order to train together - including the youngest member of the group (called 'maknae' in K-pop groups), who is only 15.

"Sometimes I really miss my family," he says. "I feel like I have to make my dream come true, to make them proud."

Another member explains how the group are all on a strict diet and fitness regime.

"It's mostly salads, chicken and fruits," he says. "We do weightlifting, skipping and press-ups to stay in shape."

Despite being away from home and needing to live by certain rules, the boys are having a great time.

"Rehearsing and living with my bandmates, I feel like I've found not just friends, but they're like family too. I'm really happy whenever I'm with them."

What do you think about what you've read? Do you enjoy K-pop music? Which are your favourite bands? Do you think it would be fun to be a K-pop star? Let us know in the comments below!