Wimbledon: Konta loses out in quarter-final 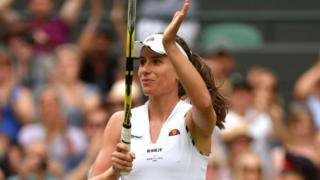 British number one, Johanna Konta, lost out on Centre Court in the quarter-finals at Wimbledon today.

She was beaten by Czech, Barbora Strycova after a difficult match which ended 7-6, 6-1.

Serena Williams took three sets to secure her place in the next round with her match against Alison Riske ending 6-4, 4-6, 6-3.

Strycova will now meet Serena Williams in the semis.

Serena has been the Wimbledon singles champion seven time already and is playing in the mixed doubles with Andy Murray as well this year.

The players to watch out for at Wimbledon

Did you see the players get soaked by the Wimbledon sprinkler fail?

Wimbledon double acts to watch out for!

Wimbledon: Should Nick Kyrgios have apologised?

PE with Joe: 'I let out the longest ripper of my life!'