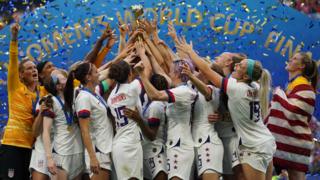 The USA scored two second-half goals to beat the Netherlands in Lyon to win a record fourth World Cup title.

USA, who were favourites to win the tournament, were held by a determined Netherlands side in the first half, with Dutch goalkeeper Sari van Veenendaal making four saves. 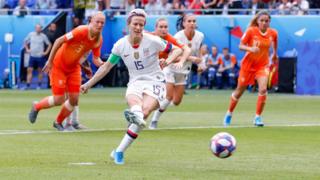 The deadlock was finally broken in the 61st minute when the video assistant referee (VAR) awarded the US a penalty.

More on the Women's World Cup

Women's World Cup: Everything you need to know

How excited are kids in France about the Women's World Cup? 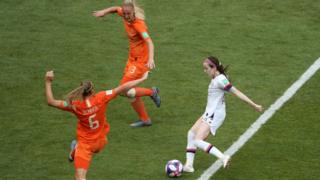 The second goal came after Rose Lavelle made a run through the middle and scored from outside the box to secure the win in front of almost 60,000 at the Stade de Lyon. 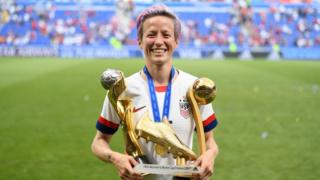 Megan Rapinoe's penalty meant that she become the oldest scorer in a World Cup final at 34 years old. She had a total of six goals and three assists at the World Cup, narrowly winning the Golden Boot award - a prize given to the highest goal scorer.

Team-mate Alex Morgan also had six goals and three assists but Rapinoe had more goals in less minutes throughout the competition.

She was also awarded the Golden Ball, given to the best player of the tournament. England's Lucy Bronze finished runner-up winning the Silver Ball award.

The US set a new goal record at the World Cup, scoring 26 in total. Half of them was scored in a 13-0 win against Thailand.

Women's World Cup: Kids tell us who they're supporting

England v USA: Who are the key players?