Every year, over 1,000 people escape from North Korea - one of the most secretive countries in the world.

They do this because in North Korea, people have to live by very strict rules. A lot of people - including children - try to escape in order to have more freedom in their lives.

Many flee via China in the hope of making it to South Korea - North Korea's less strict neighbour.

Newsround has been to South Korea to meet young people who've managed to escape and who now live in South Korea.

Find out more about the issue below.

North Korea shares a border with South Korea. For years, the two countries have not always got on with each other.

Ever since a horrific war between them in 1950 which lasted for three years, the two states have traditionally been enemies.

Find out more about North Korea

More than 25 million people live in North Korea, but their lives are very heavily controlled by the government.

They have to follow extremely strict rules. For example, they might need permission just to travel around.

What's it like to attend an internet addiction camp there?

Sokeel Park - who works for a charity called Liberty in North Korea, which helps people to escape from North Korea - told Newsround: "If you're a child in North Korea, then you won't have used the internet.

"If you try and watch South Korean TV programmes or movies from America or anywhere else, then you could be punished very harshly by the North Korean government."

A lot of people are very poor and have to rely on aid just to have enough to eat.

But North Koreans who speak out against their leader or the rules they have to follow can be brutally punished - sometimes even killed.

Reports suggest that hundreds of thousands of people have been put in prison and work camps for disagreeing with the government.

Whether they want to or not, North Koreans have to look up to and praise the country's leader Kim Jong-un and there are lots of public events to celebrate him. But it is hard to know what people really think because they are not allowed to speak freely.

People have smuggled items into North Korea which the government cannot control, like laptops and USB sticks. These have given many North Koreans a glimpse into the outside world.

A lot of people want to leave North Korea to live in countries where they will have more freedom.

Over the last 70 years, around 33,000 people have managed to get out and settle in South Korea.

It is not easy to leave North Korea. It is very risky and the journey can be dangerous.

Sokeel explains: "It's a journey that's thousands of miles. You have to go all the way through China, and if the Chinese police catch you as a North Korean refugee, they will send you back to North Korea where you may face a range of harsh punishments.

"It's very risky, it's very difficult, and so it's almost impossible for North Korean refugees to make this journey without the support of some kind of organisation."

What is a defector?

You might hear people who have escaped from North Korea referred to as 'defectors'. This is the name given to someone who has left their country to live in another one, which usually operates in a different political way.

Newsround met two teenage students and a YouTuber - all who managed to escape from North Korea to settle in neighbouring South Korea.

Read their stories below.

Diana was two years old when she came to South Korea with her mum. While they managed to escape, her brother and dad who tried to leave with them, were caught and sent back.

She says: "My mum was so brave to carry a young baby in her arms to go to South Korea for freedom." 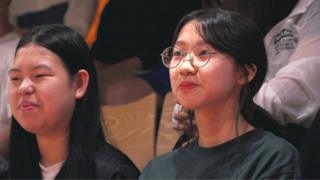 Diana, on the right, was two when her mother escaped from North Korea with Diana in her arms

Diana told Newsround how there is still some stigma with being associated with North Korea, so this was the first time that she has told her story in public.

"I was really afraid of telling people that I'm North Korean because people say bad things about North Koreans, like 'they're dumb' and 'they're spies'," she says.

Despite this, Diana feels thankful.

"I'm really lucky that I came here when I was young," she says. "I learned about more, I got freedom earlier than others."

Three years ago, Na-yeon was 17 years old when she took her little sister over the mountains into China to escape.

"There was very little food [in North Korea] and I felt hopeless," she says. "No one helped us so I felt completely alone in the world.

On the journey, Na-yeon had to sleep in the snow and even eat it just to survive.

"There was no shelter other than the mountains," she says. "There was nowhere to stay. We couldn't knock on anyone's door in China because we'd risk being sent back." 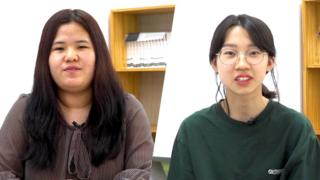 For some arriving in South Korea, it can be difficult adjusting to such a new life.

Sokeel says that friends who have done the journey have explained that it is like "coming out of a time machine".

"You have to learn a lot of basic modern things, like how to type on a computer, how to use a cash machine, even how to use a bank account and public transport," he says.

Na-yeon experienced this too. "The most surprising thing was the amount of cars," she said.

There are also aspects of her life in North Korea that she misses. "When I was a kid, I remember playing with my friends until late at night," she says. "We would have snowball fights, play ball games and do things like hopscotch. I really miss that.

"Here, everybody's looking at their phones and they don't really talk to each other."

She explains that in exchange for her freedom in South Korea, she now has a lot more responsibility.

"Here, for example, if I don't work hard at school, I can't go to university and then earn lots of money. I feel like this freedom comes with massive responsibility."

Jun escaped from North Korea when he was 17 years old.

Before fleeing, he'd never seen a computer or used the internet, but now he's a YouTuber in South Korea.

"I'd never used Google, YouTube or Facebook," he explains. But now, he uses the platform to share his story in English because he says he wants the world to know what life is like there.

"I love telling my story to people," he says.

The first time that Jun tried to leave North Korea, he went through China but he was caught and sent back.

Life is made difficult for anybody who has tried to leave as they are classed as being 'hostile'.

"I couldn't go back to high school after I was caught by police in China because in North Korea, everyone has a 'class'. I was 'hostile class' in North Korea so everyone avoided me," he explains. 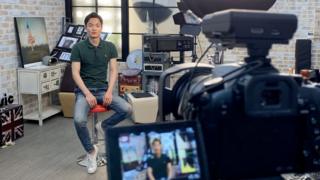 Jun thinks that it's important that he tells his story, now that he's been able to leave North Korea

"I tried to get food every day. I didn't have my mum in North Korea because she'd already escaped in 2004. I just tried to survive every day."

However, going to China had shown him what life was like in the outside world and it made him even more determined to leave North Korea.

"In 2008, I tried again because I saw a lot of things in Beijing. I'd never seen so many cars and high buildings.

"I could eat a lot of food in Beijing. It was the first time I could eat so much rice! I thought this is a kind of dream," he says.

"I think I'm living in heaven - paradise," he says. "But now I have to take responsibility for what I say, what I hear and what I do.

"But I can do anything that I want right now. It's a happy life."