Sweden's selfie museum: Unusual museum exhibits from around the world 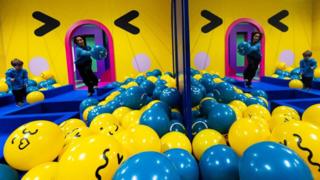 Getty Images
Visitors are encouraged to take selfies at the museum

Museums are known for housing lots of interesting artefacts, paintings and other cool objects that can't be found anywhere else, but have you ever visited one with absolutely nothing on the walls?

It's highly unlikely, but that's exactly what one museum in Sweden has decided to do!

Instead, people who visit the 'Youseum', which is based in the country's capital Stockholm, are being encouraged to become the art.

How, you ask? Well, rather than the layout of a more traditional museum, the Youseum has a number of brightly-decorated rooms which visitors can use as fun backdrops to take selfies or shoot videos.

What's on the men-poo at toilet cafe? 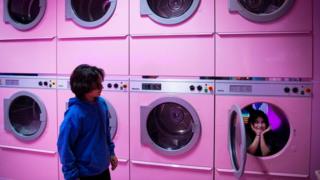 Getty Images
Would you take a trip to this museum?

"You can take cool pictures and create cool content for your Instagram... This is the perfect place to do Tiktoks," said the museum's manager Sofia Makiniemi.

Some of the spaces include an emoji room filled with blue and yellow balls with smiley and frowning faces, another with giant pillows complete with a fluffy cloud and even a room with pink washing machines!

This museum is very unusual indeed and some might even question whether it should be classed as one. That's where YOU come in!

Do you think this counts as a museum? And would you pay the Youseum a visit? Let us know in the comments below. 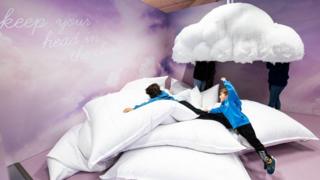 Getty Images
Is this the perfect backdrop for a dreamy Instagram picture?

This isn't the only museum that's got people talking - check out some more rather unusual ones below! 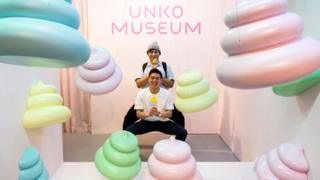 Tomohiro Ohsumi
They're such poo-sers

An exhibition all about poo might sound like it stinks, but take a look at this poop-themed show in Japan.

The Unko Museum in Yokohama focuses on everything about number twos and it's even named after the brown stuff as 'unko' means poo in Japanese.

Before you get grossed out its worth pointing out the poops aren't very realistic, instead they are more like a pastel emoji version.

Visitors can pose with poo lollipops, jump on virtual poos to splat them and they even have poo themed cupcakes.

Erm... ok... Well, these poos are pretty cute, but if you were after something more disgusting read on! 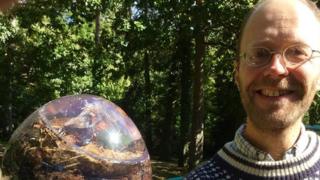 PA
What on earth could this be? It's lion poo inside a resin display ball of course!

Unko is not the only museum obsessed with faeces, there's the National Poo Museum on the Isle of Wight which opened in 2016 and has 20 different types of real poo on display.

They've got it from loads of different animals and even have fossilised dinosaur poos.

Luckily the droppings are trapped inside resin balls so it's not too stinky! Phew.

There was also a exhibition about excrement at the Miraikan Science Museum in Tokyo, Japan, in 2014.

Visitors could wear poo hats and slide down inside a giant toilet into a virtual sewer.

It was designed to be educational and put the fun back into bodily functions. Top of the plops!

And if you think that's disgusting how about this museum all about stomach-churning foods from around the world.

It opened in Sweden in 2018 and features all sorts of delicacies like eyeball soup and fried tarantula. Take a look if dare. 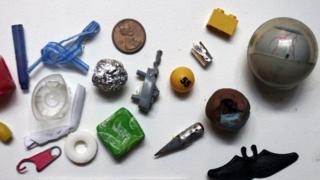 Victoria and Albert Museum
This random collection of bits and bobs includes a fake eyeball, sweets a fake moustache and an ink cartridge, gross!

Talking of eyeballs, this toy one was part of an exhibition was on at the famous Victoria and Albert Museum of Childhood in London.

It was collection of banned toys put together by a teacher and was all the toys he took off pupils in his classes over the years.

And how's this for a strange museum?

The whole museum was an inflatable blow up space which popped up in Manchester in 2016. It was a bit like a bouncy castle so was only temporary.

But it was fun while it lasted!

So what do you think... Would you like to go to a poo museum? Would you eat any of the disgusting foods? What is the weirdest exhibition you've been to?

Fancy a wacky snack? Here's our round up of strange places to eat

Which do you think is the most disgusting food at this museum in Sweden. You decide!