LGBT bullying in schools is more common than other kinds, says poll 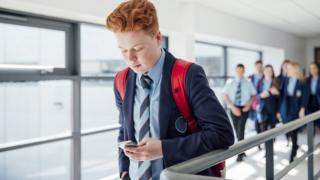 People being bullied for being lesbian, gay, bisexual or transgender (LGBT) is more common than bullying relating to racism, sexism or religion, according to new research.

A poll of more than 1,000 teachers working in UK primary or secondary schools revealed that 13% of children are bullied because of their sexuality.

Tips on what to do if you're being bullied

Bullying is when someone - or a group of people - repeatedly and intentionally hurt, insult or intimidate another person or people.

One type of homophobic bullying is when people use words like "gay" or "lesbian" as an insult.

The poll, conducted by research company YouGov for Amazon, also showed that more than half of people backed LGBT relationship education in schools, while a quarter said children should not learn about gay relationships in schools, and 16% were unsure.

Pop star and actor Will Young has teamed up with Amazon, LGBT+ education charity Just Like Us and PinkNews to encourage LGBT education in schools by introducing more diverse books to pupils.

The singer, who says he knew he was gay from an early age, says that if there had been more information when he was younger, he would not have felt so isolated.

"If there had been some literature that was made available to me, then maybe I wouldn't have felt so alone," he said.

New guidance on relationships and sex education for schools was recently published by the government.

LGBT people less satisfied with life in the UK