Teenage tennis sensation Cori Gauff will face the toughest challenge of her Wimbledon journey today when she takes on Simona Halep on 'Manic Monday'.

The 15-year-old American started her Wimbledon journey with a stunning upset over five-time former champion Venus Williams in the first round.

"I'm still shocked I am even here," Gauff told the BBC. "I believe I can beat anyone across the court."

The players to watch out for at Wimbledon

Murray opens up about tennis and mental health

All you need to know about Wimbledon

Gauff, who's nicknamed "Coco", had already made headlines when she became the youngest player - at 15 years and 122 days - to qualify for the main Wimbledon draw since the professional era began in 1968.

Read on to find out more about this incredible sporting teen.

Cori still has do to homework 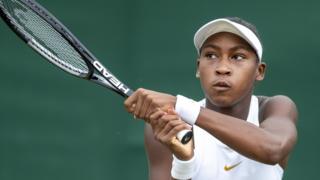 Cori grew up in Atlanta, US, before moving to the state of Florida to follow her tennis dream.

But even though she taught Williams a lesson on the court, Gauff still has plenty of classes to attend herself at school.

She's home-schooled by her mum, a former teacher, but also takes virtual classes when she is travelling the world.

The night before her final qualifying match for Wimbledon, the teenager had to stay up late to take a science test at 11pm UK time.

Her parents are sporty too 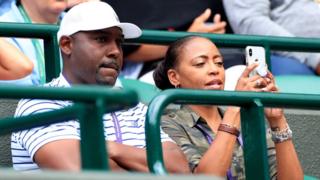 Cori, who comes from a sporting family, started playing tennis at the age of seven.

She is coached by her father Corey, who played basketball at Georgia State University in the United States.

Her mother Candi was a track and field athlete at Florida State University.

She also has two younger brothers, Cody and Cameron.

Venus and Serena are her heroes

Gauff has said she was inspired to play tennis by 23-time Grand Slam winner Serena Williams. and her sister Venus.

"Serena is the reason why I play tennis and why my dad decided to get me a racket," she said.

"[My first memories] were of watching Serena playing at Wimbledon and she won, though I don't remember which year, she has won so many times" Cori added.

But the famous sisters have also become fans of the teenager.

"She's so cool. She's a great girl. I love her dad. They're just really cool people", Serena said recently at a press conference.

Want a different side to Wimbledon? 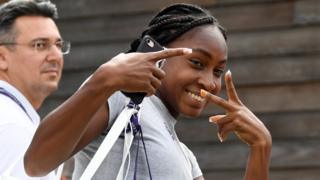 Cori might be a rising tennis star but she also enjoys doing the same things that other teens do.

She's a huge fan of Ariana Grande and went to her Sweetener tour concert. Cori also lists Jaden Smith as one of her favourite music artists.

It seems Coco is also a Marvel fan, dressing up as the female version of Thor for Halloween in 2018.

Gauff also tries to use her growing voice to raise awareness about issues she cares about. She recently highlighted the crisis in Sudan on her social media and asked people to donate.

Last year, she won the French Open girls singles only two months after her 14th birthday.

Her win against Venus Williams means she becomes the youngest tennis player to win a match at Wimbledon since 1991 - when fellow American Jennifer Capriati, who was also 15, defeated nine-time champion Martina Navratilova.

Former three-time Wimbledon champion and tennis legend John McEnroe said "I look at the way she plays. If she's not number one in world by 20 I will be absolutely shocked."